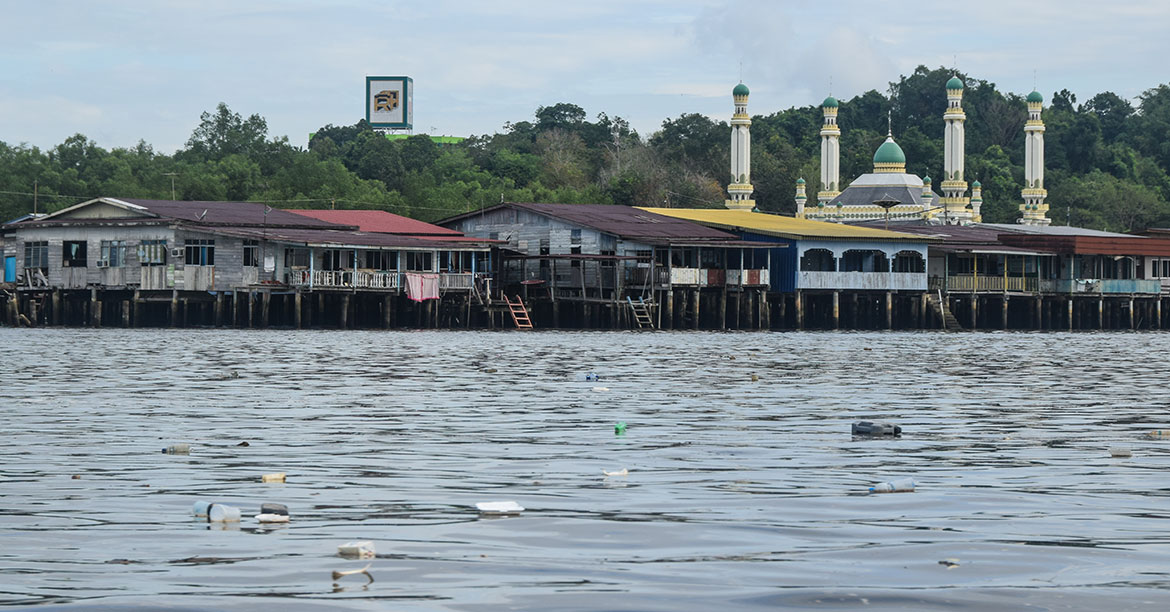 The once-populous Brunei district of Kampong Ayer, a community of stilted homes and wooden walkways, is a shell of what it once was in its heyday as residents drift to the city.

The low, largely single-story wooden buildings that make up much of the water village of Kampong Ayer cling to the southern bank of the Brunei River, opposite tower blocks, shopping malls, minarets and the Sultan’s sprawling Istana Nurul Iman, the world’s largest residential palace, adding a splash of colour to contrast with the lush green forests rising endlessly behind it.

Reached by a one-minute ferry ride from the compact central business district of Brunei’s capital Bandar Seri Begawan, Kampong Ayer – still possibly the world’s largest stilted water village – is now home to just 3% of the country’s 445,000 residents. When the fleet of Portuguese explorer Ferdinand Magellan called into Brunei in 1521, it recorded a population in Kampong Ayer of 25,000 families, and as late as 1971, about 60% of Brunei’s population of 136,000 – more than 81,000 residents – still called it home.

“Why is everyone so obsessed with Kampong Ayer?” asked a teenage boy dismissively, eating KFC in the park surrounding Omar Ali Saifuddien mosque; the park, overlooking water villages on both sides of the Brunei river, formed part of Kampong Ayer until 1994, when a major land reclamation project led to the nearby malls, offices and the park.

“It’s dirty and boring, and there’s nothing to do. I never understand tourists wanting to go. Only old people and foreigners live there now,” he added, before turning his attention back to his phone. 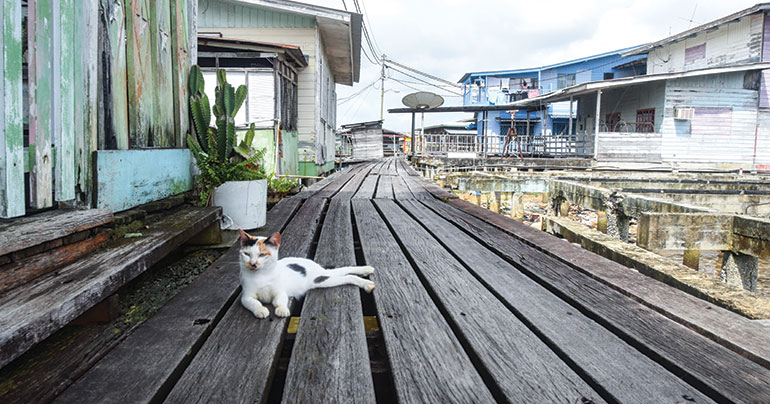 A local cat lazes on the wooden walkways

As the tiny country on the northern shore of the island of Borneo has grown and developed on the back of its rich oil and natural gas deposits, so too has the demand for shopping malls and modern housing. Multi-lane highways link the various neighborhoods of the sprawling capital city, and Kampong Ayer has been left behind as Brunei’s population has shifted to solid ground.

The landward migration, begun by the colonial British at the turn of the last century, has left Kampong Ayer a shadow of its former self, with older residents forming much of the remaining population. Economic migrants from Indonesia and Malaysia have been attracted by the cheap rent for the empty houses left behind, further changing the nature of what has been described as the heart of Brunei.

“[Migration] has transformed Kampong Ayer fundamentally,” proclaims a 2017 working paper on migration published by University Brunei Darussalam. “The symbolic meanings that Kampong Ayer has evoked within the consciousness of Bruneians have changed considerably. In their minds, Kampong Ayer has changed from a functional living space to a place that belongs in the past (though this perspective is often tinged with a sense of romanticism and nostalgia).”

Kampong Ayer has been the principal settlement of Brunei for much of the nation’s history, which at its height in the 1500s stretched to parts of the Philippines and Indonesia, and included all the coastal areas of Borneo; yet it hasn’t always been in the same place. When the British took colonial control over Brunei in the late 1800s, a policy of inland migration away from Kampong Ayer was undertaken in the name of development. As communities and industries were moved to Bandar Seri Begawan, where land and infrastructure better-suited growth, the centuries-old life in Kampong Ayer began “a downward trajectory that chipped away at the very soul of the place”, as the working paper puts it.

The shift of industry to the mainland has had a noticeable effect on the livelihoods of Kampong Ayer’s residents.

“There is a general sense of hopelessness, as [there are] no jobs for people. With people leaving to find work, only the young and old are left in Kampong Ayer,” said an expert on poverty in South Asia, who spoke on condition of anonymity for fear of offending the Ministry of Development.

“A lot of people are living in poverty. There is a lack of jobs, no food security now with the loss of fishing,” added this source. This is despite a per capita GDP of some $77,000, which, according to the International Monetary Fund, is the second highest GDP in Southeast Asia, behind Singapore, and fourth highest in the world.

Fragments of Kampong Ayer’s rich history are displayed in glass cabinets at the small museum in the water village. Pottery from China, coins, metal slag, fishing weights and other signs of industry and trade paint a picture of the settlement’s rich fabric. Examples of the crafts once made in the water village are also displayed behind glass – an apt reminder of a once thriving traditional economy.

Today’s residents have largely stopped crafting the boats, cloth, jewelry and baskets that were once produced there and which gave name to the various sub-villages that make up Kampong Ayer. Instead, a handful of artisans now make their living at the Brunei Art and Handicrafts Centre in the capital, the multi-storey concrete building visible from the water village but very much detached from it. Residents now are largely reliant on pensions and state support or commute to the mainland to work low-paying service jobs.

“It is harder to find crabs,” said one long-term resident with a resigned shrug. “I get the same price now per kilo as 10 years ago, but I catch less.” 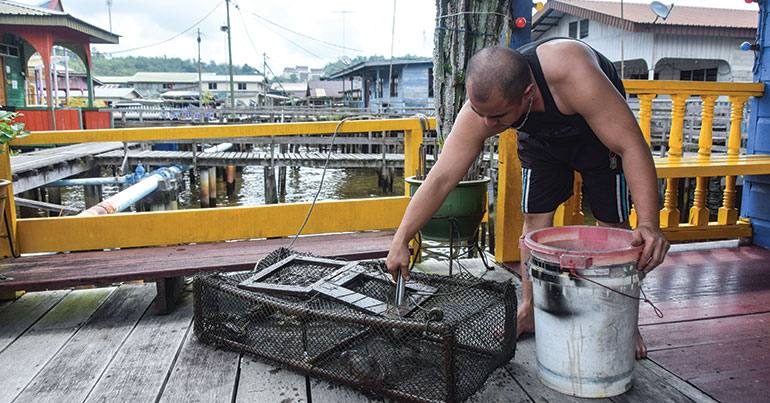 A fisherman checks his traps

The fish stocks that once supported the thriving community have disappeared as water quality has worsened, due to pollution from rising populations along the river and the effects of up-river quarrying explained tour guide Richard Ret.

“It is difficult to find people involved in the fishing industry now, from making the boats and equipment to seeing actual fishermen out on the water,” said Ret.

The lack of infrastructure development extends beyond sewage. The whole of Kampong Ayer has only one fire station, and the wooden houses and the wooden walkways linking them has meant the water village, ironically, has been prone to devastating fires. Charred concrete piles poking out of the water offer jarring evidence of the susceptibility of the old houses.

The Kampong Ayer museum notes, however, that the government is actively seeking to address some of these development deficiencies.

“Kampong Ayer is equipped with basic yet modern infrastructure. It receives a substantial annual budget from the government due to its status as a national landmark,” notes an information sign at the museum.

Some of this modern infrastructure is visible in the newly renovated area surrounding the museum, where rows of modern beige and brown homes have replaced the traditional, colorfully painted wooden homes.

The two-storey buildings sell for about $45,000, while the bungalows are about $27,000, explained the tour guide. In contrast, the old wooden houses are closer to $4,000. All are available only to Brunei citizens and subject to Development Ministry discretion. 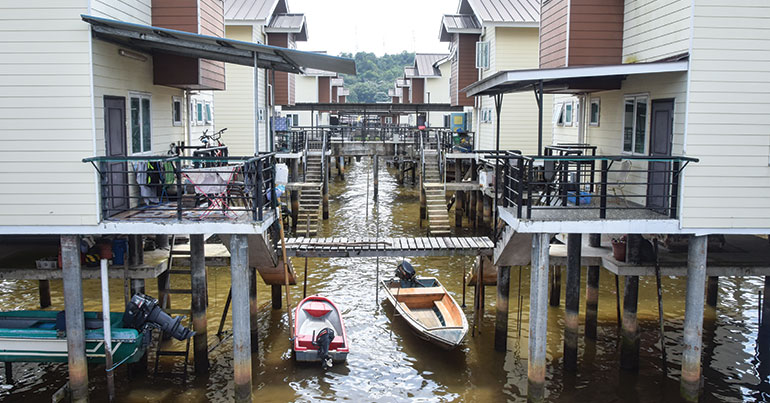 But as Kampong Ayer battles with negative perceptions – pollution, arrival of foreigners, growing crime and widespread unemployment were all highlighted as areas of concern in the white paper – the transformation of the water village into a commuter base with affordable property and speedy commuting times could arrest the decline and make it more attractive to newcomers.

Tourism is another area that might preserve some of Kampong Ayer’s history and atmosphere. Airbnb started operating there last year, and visitors can now stay in one of the traditional wooden houses. The Tourism Ministry hopes to attract 278,000 visitors to the country in 2018, up from around 240,000 in 2017, with Malaysia, China and the Philippines providing the bulk of visitors.

For tour guide Richard Ret, it is important for Kampong Ayer to be protected, preserved and developed to best meet the needs of local residents, as well as tourists: “I have heard talk of making restaurants for tourists, and maybe a floating market, both of which will help to make Kampong Ayer even more popular with visitors and boost their positive image of Brunei.”

For as much as Kampong Ayer may represent Brunei’s past, the effects of colonial and government policies have irrecoverably altered it. As the 2017 working paper noted, “That Brunei is Kampong Ayer and Kampong Ayer is Brunei seems like a distant past; a pre-European legacy.”

How Kampong Ayer responds to the demands of today and tomorrow is key, whether it becomes an affordable community within easy commuting distance or a tourist destination trading not off what it used to be, but instead what it offers now: riverside views, unique walkways and quirky, colorful buildings.

Either way, as the South Asia poverty expert, cautioned, any future development must be done with Kampong Ayer’s current residents in mind, and not dwell on the past: “It is a living, breathing entity. If we try to treat it as an object in a museum, it will be difficult to have success.”