As urban food insecurity attracts growing interest in policy debates, Cecilia Tacoli makes the case for ensuring that the views of poor urban residents both inform and shape solutions. 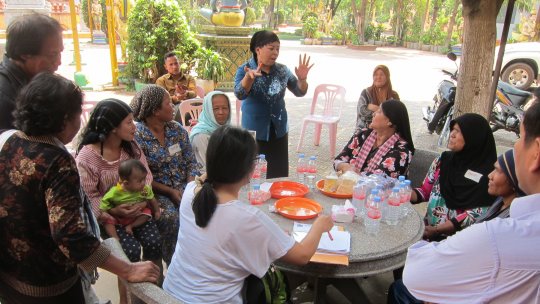 People discussing food security at a meeting in Kulalom, a district of Phnom Penh, Cambodia. The meeting was organised by a local community-based savings network (Photo: ACHR)

For decades, the global debate around food and nutrition security-focused mainly on production, but there is now increased attention on consumption.

This reflects two major transformations: the first is that the majority of the world’s population now lives in urban centers and relies primarily on purchasing food to feed itself.

The second is the changing nature of malnutrition. There is a growing number of overweight and obese people and, at the same time,  persistently high levels of undernourishment, especially among children.

Most policies that aim to address food and nutrition security from a consumption entry point focus on access to markets and education about nutrition. While these are certainly important, there seems to be an underlying assumption that urban consumers are a homogenous and relatively affluent group able to make choices when it comes to their diets.

But this ignores the large proportion of urban residents who live in poverty. For them, food is a central concern that is deeply interconnected with concerns about income, shelter, and access to basic infrastructure and services.

What do the real experts say?

To effectively address food insecurity and malnutrition, we need to give voice to the urban poor. What are the main challenges to putting food that is sufficient and of the quality they want on the table? What are their strategies to make sure that, come what may, their families have something to eat?

Since no one knows more about these issues than the urban poor themselves, we turned over these questions to our long-term partner, the Asian Coalition for Housing Rights (ACHR). Since 1988, ACHR has brought together professionals, NGOs, and grassroots organizations committed to working with the urban poor to ensure their voices are heard so that they are able to influence change in their cities.

Between 2017 and 2019, women from ACHR member organizations in Cambodia and Nepal spoke to women in low-income urban settlements about their struggles to put food on the table. The study found that:

For the urban poor, food insecurity is a multi-faceted problem, which is difficult for individuals and single households to address on their own. Policies advocating better access to markets and nutrition education are unlikely to make a dent as they ignore other significant constraints, such as low-income levels, poor infrastructure and inadequate housing.

The communities in this food study agreed that collective action was needed. Existing savings groups have been re-energized and new ones set up with a focus on reducing the burden of debt; and community gardens are flourishing on vacant plots, rooftops, and windowsills.

But most importantly, as communities take ownership of issues and develop their own leadership, they become stronger and are able to engage in dialogue with local government to drive deeper change.