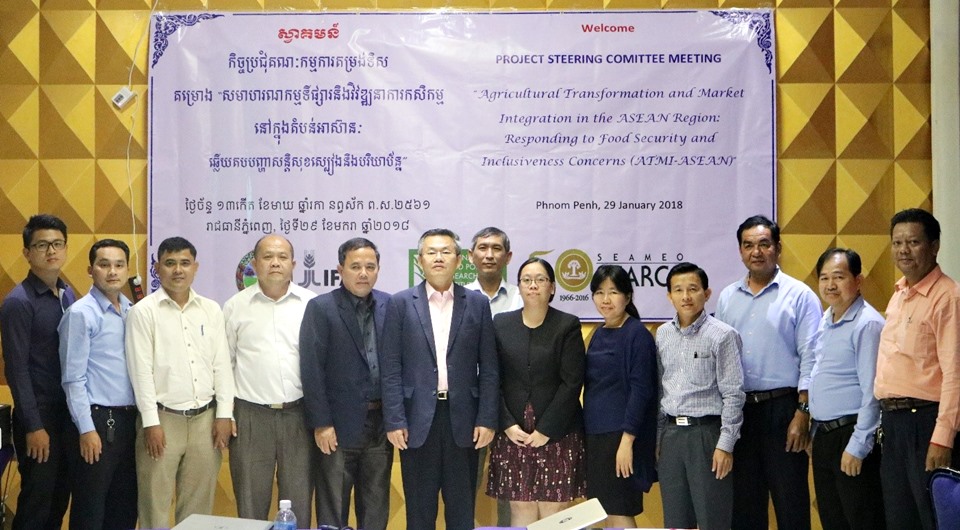 The NPSC Chair, His Excellency Ty Sokhun, Secretary of State of MAFF, warmly welcomed the NPSC members and the Southeast Asian Regional Center for Graduate Study and Research in Agriculture (SEARCA) for participating in the meeting. He emphasized that the purpose of the meeting is to introduce the project to the members and familiarize them with its implementation in Cambodia. His Excellency also mentioned the activities that MAFF had participated in, as these relate to the ATMI-ASEAN project, namely: the Regional Launch Workshop; the National Inception Workshop; and the back-to-back Focal Points and Researchers Meeting and Training-Workshop on Rapid Value Chain Assessment held in Bangkok, Thailand.

Ms. Bernice Anne C. Darvin, Project Associate of the ATMI-ASEAN Project, delivered the Participatory Remarks of Dr. Bessie M. Burgos, Head of the Research and Development Department of SEARCA. In her speech, Dr. Burgos congratulated MAFF for successfully organizing its first NPSC meeting and emphasized the crucial role the committee plays in relation to the conduct of the national-level project events, particularly the policy research in Cambodia, which in this case, will focus on maize value chain. Also on behalf of Dr. Burgos, Ms. Darvin presented a short overview of ATMI-ASEAN, specifically its overall goal and objectives, components, activities, and expected outcomes. Mr. Sorn Vichet, Chief of Planning and Statistics Office, General Directorate of Agriculture (GDA), MAFF discussed the Memorandum of Agreement (MOA) between SEARCA and MAFF, as well as the plan of study for the Value Chain Analysis of Maize in Cambodia. On the other hand, Mr. Prak Cheattho, Deputy General Director of GDA, explained the rationale behind selecting maize as Cambodia's priority commodity instead of rice or cassava. He said that there is already a number of existing policies covering rice in the country and that the Ministry of Commerce and another international organization are already working on cassava. Maize, on the other hand, is an important source of animal feed for the country and involves many small-scale rural producers (SSRPs).

Representatives from different government agencies, farmer's organization, and the academe, including Dr. Seng Mom of the Royal University of Agriculture (RUA) and SEARCA's Governing Board Representative of Cambodia, attended the meeting and participated in the open discussion regarding the MOA and the plan of study. The committee agreed to conduct a value chain study on the maize industry of Cambodia but suggested to further strengthen the team's research capacity by adding more members from GDA, Cambodian Agricultural Research and Development Institute (CARDI), and Prek Leap National College of Agriculture.