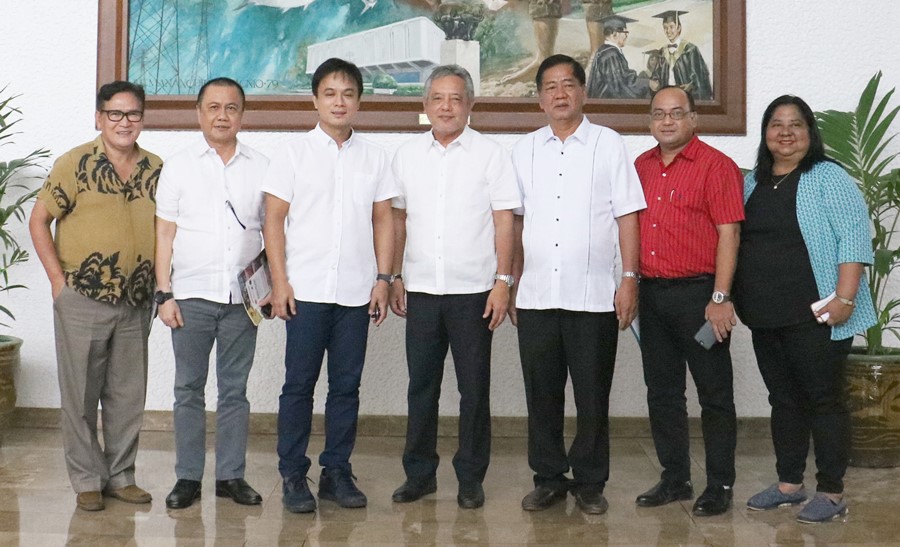 Dr. Saguiguit (center) flanked by Governor Hernandez (on his left) and Los Baños Mayor Cesar Perez (on his right) along with other local government officials of Laguna, Philippines

The Southeast Asian Regional Center for Graduate Study and Research in Agriculture (SEARCA) has firmed up its linkages with the Department of Interior and Local Government (DILG) and local government units (LGUs) at the Provincial Alliance Building Dialogue for the Province of Laguna as an alternative approach to reach farmers and grassroots communities. Los Baños-based SEARCA hosted the dialogue on 8 August 2017 in partnership with the DILG.

"Development must start at the grassroots," stressed SEARCA Director Dr. Gil C. Saguiguit, Jr., "and our ally in reaching those communities are LGUs, through whom we are able to deliver and extend our program initiatives focused primarily on bringing about inclusive and sustainable agricultural and rural development (ISARD)."

He said "SEARCA is now increasingly invited to multisectoral meetings to see how we can input into their development plans, particularly on how they relate to agriculture."

The dialogue brought together chief local government executives of the cities and municipalities of Laguna.

Present at the forum were Laguna Governor Ramil L. Hernandez, as well as mayors and other officials of LGUs in Laguna.

Governor Hernandez expressed his support and endorsement of SEARCA's school and home gardens program to be spread throughout the province. This project was highlighted in Dr. Saguiguit's briefing to the Governor and several town mayors.

SEARCA Director Dr. Gil C. Saguiguit, Jr. (left) explains to Laguna Governor Ramil Hernandez the gains of SEARCA’s school and home gardens program in six pilot schools and its prospects for the schools in the rest of the province of Laguna.

SEARCA's "Participatory Action Research on School- and Community-based Food and Nutrition Program for Literacy, Poverty Reduction, and Sustainable Development" was piloted in five elementary and one high school in six towns in Laguna. Carried out in partnership with the University of the Philippines Los Baños (UPLB) and the Department of Education (DepED) Division of Laguna, the project's key accomplishments focused on nutrition, education, and economic well-being.

Moreover, Governor Hernandez is keen to engage SEARCA in his farmers' education initiative. He suggested that SEARCA take the food and nutrition program a notch higher to the level of farmers through SEARCA's involvement in his provincial government's farmer field schools.