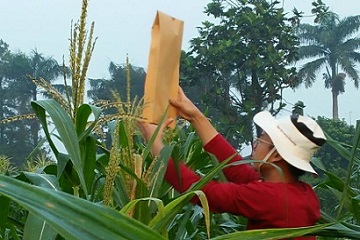 Who do not know corn? Food sources that has been targeted to be one of the government's commodities to achieve food self-sufficiency in Indonesia. The national program which has been implemented since 2016 is focused  on rice and corn commodities through Upaya Khusus Tanaman Pangan Padi, Jagung dan Kedelai (Upsus Pajale = Special Efforts in Food Crops Improvement for Rice, Corn and Soybean (Upsus Pajale).

Inspired by the government program, a group of students of Agronomy and Horticulture Department (AGH) of Faculty of Agriculture of Bogor Agricultural University (FAPERTA IPB) under the Program Kreativitas Mahasiswa bidang Penelitian (PKM-P Student Creativity Program for Research) implemented their study to contribute to agricultural development of Indonesia.

The group designed the study program and to determine the nutritional value of some maize varieties i.e. jagung pulut (waxy corn) Zea mays var. Ceritina Kulesh. They compared some selected  jagung pulut species with other corn to evaluate their nutrient content. But jagung pulut offers plenty of nutritional benefits that make it worth the extra effort to include it as part of a balanced diabetic diet. "We compare jagung pulut  it with other regular field corn, its nutrition content, we also want to promote  this corn a alternative staple food for Indonesia. Therefore, if jagung pulut  is fully accepted for the national staple food, the national food sufficiency could be easily attained. "said Audi as chairman of the group.

Jagung pulut or Waxy maize (Zea mays L. var. certaina Kulesh), with many excellent characters in terms of starch composition and economic value, has been introduced to Indonesia recently Corn that has another name that is glutinous corn has a sticky texture like sticky rice and sweet taste. This waxy maize glutinous corn is the basic ingredients for sweet porridge in Manado, and other traditional foods. Sweet taste is given, sourced from high carbohydrate content in which the amylopectin content reaches more than 90 percent. Because of the high carbohydrate and protein content of sticky corn, it is not surprising that this corn has the potential to be developed into a source of bioethanol and as a paper adhesive raw material.

The groups consisted of  Audi Sobriyan, M. Agus Narayubi, Neni Oktanti, Chandi Tri Akbar and Fitri Dwi Febriani. They designed a study program to determine the best productivity of corn pulp by giving corn pollen based on the length of corn hair. Pollination of maize is based on the growth of the growing hairs of maize which will be sought for the results of the pollination that produces the best maize.

The study had been carried out in Leuwikopo Experimental Garden, Campus IPB, Dramaga, Bogor, utilized corn seed varieties UR11 as their experimental material. The corn seeds were cultivated by stager planting method for fenetic regulation of flowering time. In general, jagung pulut is ready to be harvested after 2-3 months of planting.

The group expected that their participation in the government program Upsus Pajale, will be able to help to promote  jagung pulut to become one of the country's staple food as well as various corn-based traditional food in Indonesia representing a wealth ethnic food in every regions that needs to be preserved.