Researchers in Indonesia have deciphered the chemical cues used by rice to attract a parasitoid that helps fight off the plant's predator. The researchers created a system to imitate these cues, which could help investigate similar interactions in other crops and possible sources of non-toxic pest control. 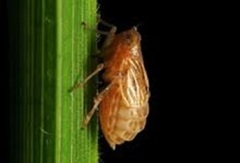 The brown plant hopper is one of rice's most destructive pests. Researchers in Indonesia investigated if they could develop a nontoxic pesticide based on the rice's own chemical signals.Rice is a staple food, relied upon by half the global population. The brown planthopper (BPH) is one of rice's most destructive pests, causing damage by wounding the stem of the plants to lay the eggs for the next attack and by transmitting viruses that attack the plant. 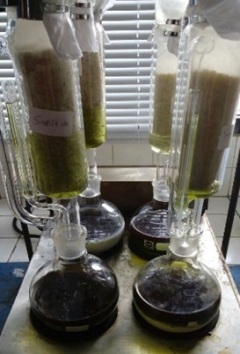 The extraction process.They extracted samples from rice infected by the brown planthopper and analyzed their chemical makeup. They then compared this to what they found in samples taken from healthy rice, identifying the chemical differences between healthy and infested rice.

They created a porous material from rice husk and soaked different pieces in chemicals extracted from either healthy or infected rice. In laboratory tests, the parasites were more attracted to the material infused with the infected sample. They also attached infused materials to posts and placed them outside in a rice field. Again, they found more parasitoids on the infected sample, but the researchers observed that the effect wore off over five days, so the samples effectively had an expiration date. 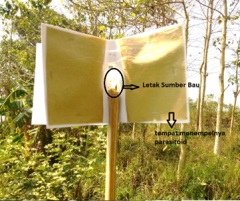 The field experiment set-up.The results, published in the Pertanika Journal of Science and Technology, could guide further trials to see if applying the chemical cue could actually reduce the pest's destruction of rice paddies; and if so, to what degree. The use of analytical chemistry offers insights into the mechanisms underlying these interactions and detect small changes taking place in great detail.

They note that their technique exploring the interaction between plant, pest and the pest's own predator on a chemical level requires further refinement, but could eventually be applied to other agricultural crops and potentially reduce the use of harmful pesticides.