A recent visit to a chilli and rock melon farm in Banting, Selangor – part of the Malaysia Digital Economy Corporation (MDEC) Digital Agtech initiative's pilot project – demonstrated a good example of the combined implementation of 4IR and digital technologies that MDEC has been championing for the nation.

In collaboration with the Kuala Langat Area Farmers Organisation (PPK Kuala Langat) and Bank Pembangunan, these pilot farms have been fitted with 4IR technologies such as digital sensors, remote monitoring and management through automation which translates into a consistent precision farming with great yields and compelling financial returns. 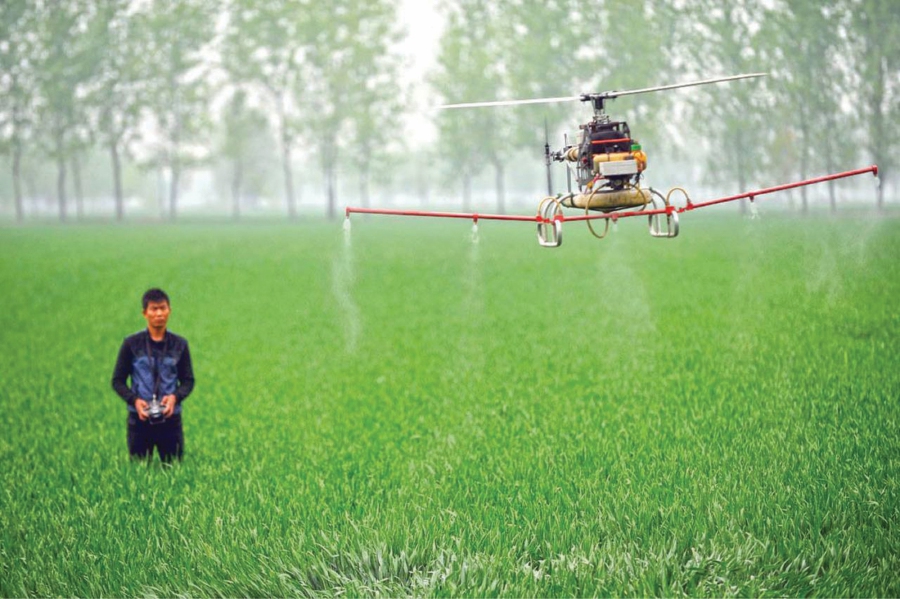 MDEC’s Digital Agtech is helping to catalyse and drive the modernisation of the agricultural sector in Malaysia. (Photo: New Straits Times)

The chilli farms used smart sensors embedded in each chilli plant polybags to detect temperature and humidity, providing information on when and how much water is needed.

The information can all be monitored remotely. Also, it uses precise control of fertigation, which combines fertilisation and irrigation. Based on the data from the sensors, which can also measure pH of the medium and fertiliser concentration, specific quantities of nutrients are solubilised using pumps in a mixing tank, which are then pumped through small pipes that drips at each polybag.

Pesticides (if need be) are also applied using automated sprayers that move throughout the farm on specially designed rails. This was reported to contribute to greater efficiency, where the entire two-acre plot can be covered in about three minutes, when it would have taken up to 90 minutes using manual labour.

The combined precise automated fertigation and fertiliser application was reported to reduce the required man-power to only two permanent staff for a two-acre plot, and would benefit from higher economies of scale. For example, a 10-acre plot would need between three to four people.

Precision and consistent farming impact on overall operational and cost efficiency leads to better nutrient uptake, better yields, and therefore, financial returns. The farm managers reported that chilli grades have shifted to about 90 per cent grade A chillies where previous traditional process yields only about 25 per cent. The remaining are grade B chillies, with no grade C being produced.

The huge quality jump helps drive up the revenue due to higher prices of higher-grade chillies. In fact, the capital outlay for the digital technology and automation of only about RM50,000 per acre of land was reported to have a payback period of only one to three years, depending on prices and harvest quantities. Minimum scale could be between half to one acre, though bigger plots of land would have better economies of scale, and therefore, better returns.

Similar technology application was seen at another pilot plot at the rock melon farm, where characteristics of the rock melons could be "controlled" to produce a certain size and sweetness.

Results from MDEC's Digital Agtech pilot projects have showcased the viability of digital technologies and automation in agriculture. However, there is room for even more technological improvement. We can go beyond Industry 4.0's version of agtech, and into "agtech 5.0" which is also envisioned under Malaysia 5.0, inspired after Japan's Society 5.0.

The "Big Data" generated from the sensors (Internet-of-things or IoT application in agriculture) can perhaps be combined with meteorological data, whereby the information could help in not only precision farming, but also predictive management that could help better manage inventories and supply chains.

Researchers Verónica Saiz-Rubio and Francisco Rovira-Más from the Agricultural Robotics Laboratory (ARL) of the Polytechnic University of Valencia in Spain, mentioned how modern data-driven agriculture technology that is available today can be both a sustainable and profitable way to provide food for the people while minimising environmental impact.

In the near future, innovative fintech and trading platform such as blockchain-based peer-to-peer (p2p) market platform may be considered to support small farmers by minimising the role of the middle-man (if not cut out entirely) and ensure best prices for the consumers, and better margins for the farmers.

Technology has made agriculture a "high-tech" industry, with financial prospects that could attract younger entrepreneurs from the more tech-savvy generation. In light of the unemployment and underemployment situation in Malaysia, this is a viable prospect to be explored by Malaysian graduates and young entrepreneurs, especially when more funders jump on the bandwagon to provide easier and cheaper access to capital.

Chilli is a good start, given that it is also a crop that is very reliant on imports. It's self-sufficiency level (SSL) dropped from 65.5 per cent in 2013 to 31.9 per cent in 2018 based on data from the Department of Statistics Malaysia (DOSM), despite being a common ingredient in Malaysian food.

Similar technologies should be applied to other crops in Malaysia, particularly paddy. Despite a major rice consumer, Malaysia is only producing roughly 70 per cent of the total demand internally, while the remaining are imported. In fact, its SSL dropped slightly from 70 per cent in 2018, to 69 per cent in 2019.

A global crisis such as Covid-19 pandemic has shown Malaysia's vulnerability in food security when trade activities are halted, depriving Malaysia from its staple food.

It was reported in the New Straits Times that Datuk Dr M. Nasir Shamsudin, professor at Universiti Putra Malaysia's department of agribusiness and bioresource economics, pointed to how food production which includes crops, livestock and fishery are still net imported goods worth around RM18 billion annually.

Thus, in addition to transcending the current notion of food sufficiency (achieved via imports supplementation) to actual self-sufficiency (for obvious national food security reasons), there is existing and sizeable captive market with an upward trend to be capitalised on, and technological advancement is the way forward.