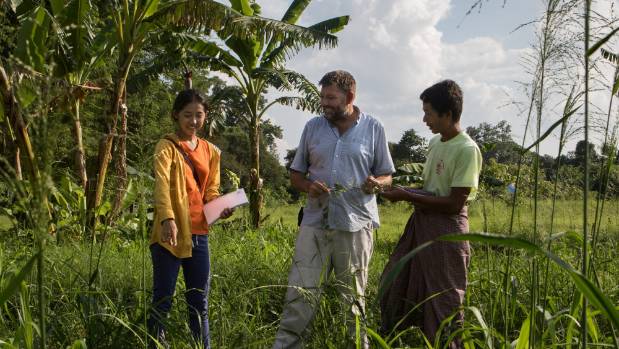 MFAT technical advisor Kent Weston-Arnold standing in a field of mombasa grass with farmer U Ouh Kyau and Dr Su Hlaing Phyo, outside of Mandalay, Myanmar.

A few cows are tied to a tree in the 40 degree Celsius heat.

That's how Myanmar dairy farmer U Ouh Kyau grazes his cattle, as is the way in the Southeast Asian nation now blighted by ethnic cleansing.

As a cow wrestles against a rope tying it from nose to branch, visiting dairy advisor Kent Weston-Arnold inspects a slightly underweight six-month-old calf. 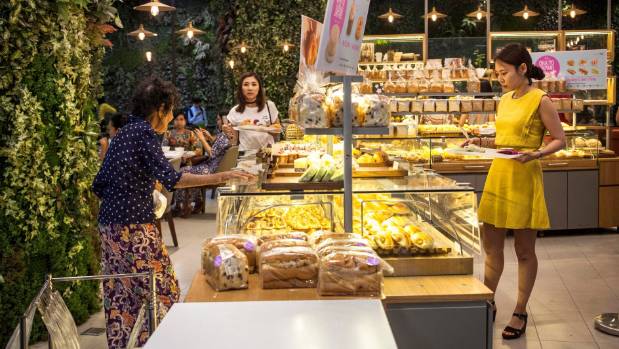 The beginnings of a Western-style dairy consumption can be seen at the likes of Yangon's BreadTalk bakery, where Fonterra sells three tonnes of dairy product a month to the store.

"If I get you a bottle, would you feed the calf out of a bottle?" he asks. Ouh Kyau returns an unconvinced, bemused smile. "This is typical of Myanmar ... He's done an amazing job growing his grass, but he's not a great stockman."

But with the help of New Zealand aid money, it's hoped Myanmar can produce better stockmen. 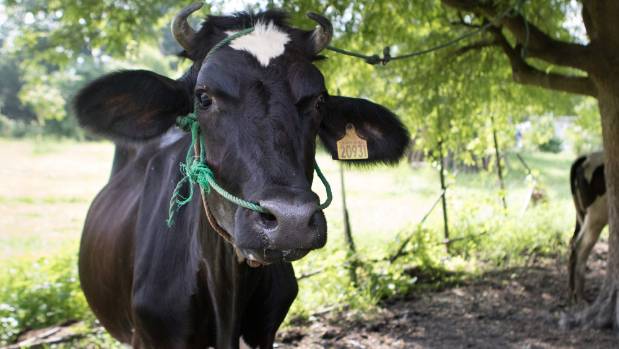 THOMAS MANCH/STUFF Traditionally, dairy farmers in Myanmar tie their few cows to trees and feed and water them twice daily. Milk yields are low, and fodder is of poor quality.

The "agriculture diplomacy" project hopes to foster a love for milk in Myanmar, but also has New Zealand's dairy trade interests front of mind.

In a country where people's dire needs extend beyond poor quality milk, critics ask the question: why are we helping Myanmar's dairy farmers? 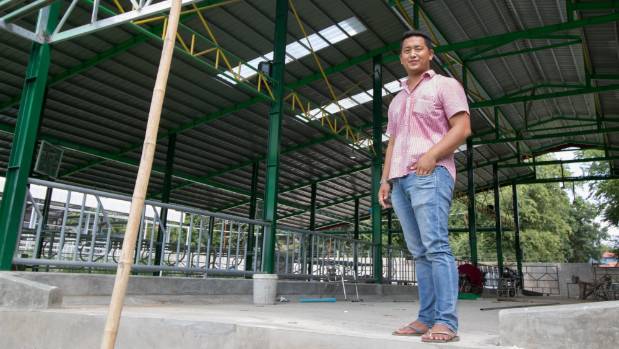 Traditionally, Myanmar dairy farmers have a handful of cows tied to trees. Feed and water are given twice daily, in the 40C heat.

Milk yields are a low six to eight liters a day, a third of what is achieved in New Zealand. The fodder often used is nutritionless rice straw. There are only three or four suppliers who refrigerate and most equipment is never washed with hot water.

Weston-Arnold is one of four New Zealanders working on the project, contracted by the Ministry of Foreign Affairs and Trade (MFAT) and based in Myanmar's second largest city, Mandalay.

Shwe Oh is state of the art for Myanmar: this week they're moving 60 milch cows into a new barn, and are finishing a modern herringbone-design milking shed capable of handling 10 cows.

The father and son team also buy milk from other farmers to make yoghurt and cheese, sold along with milk at the family's three Mandalay shops.

One of the original "nucleus farms" targeted by the dairy project Shwe Oh has clearly benefited from the expertise. Kyan Shone Kyin was one of ten to visit New Zealand as part of the program in 2014, where he learnt about animal nutrition and pasture.

And through their continued innovation, Shwe Oh has seen profit - minus labour and feed costs - rise from NZ$2150 a month to $6300. 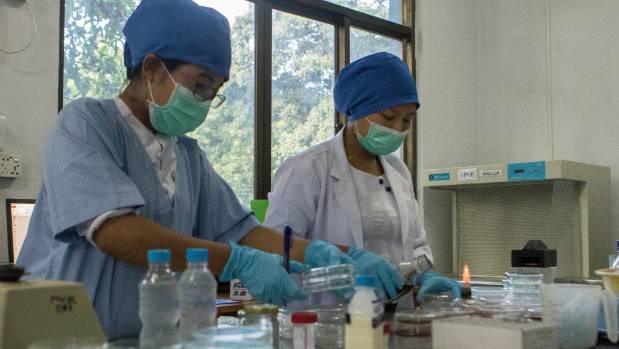 Myanmar Livestock Breeding and Veterinary Department laboratory technicians have begun testing milk samples. Much of the milk is found to be adulterated with water.

But hopes that knowledge imparted at nucleus farms would trickle down to smaller, neighboring farms were not realized. The approach has since changed to working closely with about 110 farms and including another 120 farmers in discussion groups.

The farmers keep in contact and share knowledge over Facebook, the project staff make regular visits, track each farm's performance on an app, and hold regular farm open days.

Weston-Arnold says milk yields haven't increased a great deal, but the use of mombasa grass has increased profit margins. 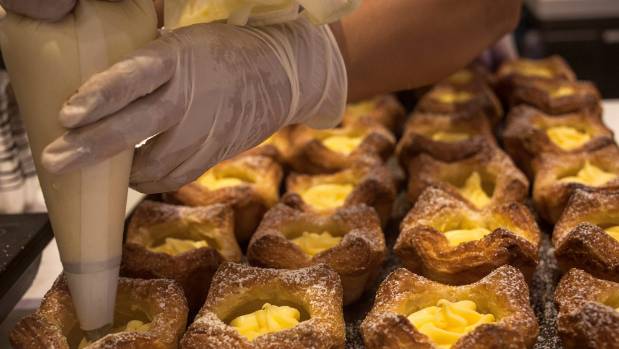 ASEAN data shows Myanmar's butter imports soared by US$1 million in 2016, to $2.5 million. Consumption of the fatty dairy product is being largely driven by the popularity of baked goods.

The tropical grass grows in long, thick-bladed tufts which can be cut for fodder every 19 days during the summer. Importantly, it's half the price of rice straw, has 60 percent more energy and 100 percent more protein.

"If we could replace the use of rice straw with the use of good quality fodder, that would have a massive impact on the industry," Weston-Arnold says.

The success of mombasa is apparent in Sagaing, near Mandalay, where farmers U Winbo Bo and U Hmwe Thein are now using it for fodder.

Hmwe Thein was initially skeptical of the project's foreign experts and their promises about the impact of mombasa grass, so he decided to plant it on two acres of "bad land". Now delighted, he is saving $310 a month on the cost of dry feed.

U Winbo Bo has just replaced the roof on his shed for his three cows, now fenced and untethered.

"When these guys make that sacrifice, you feel a responsibility. These guys don't have a lot to invest," Weston-Arnold says.

With phase two of New Zealand's aid programme wrapping up in February 2019, Weston-Arnold wants to first establish a refrigerated collection service for a community of 300 dairy farming families south of Mandalay.

The farmers will transport milk to a central collection point and the milk will be tested along the supply chain to ensure safety. New Zealand has equipped a spartanlab that is due to test 1000 samples from about 40 farms this year.

"At the moment there isn't really a customer driven demand for quality tested milk, but it's happening," Weston-Arnold says.

MFAT head of development co-operation in Myanmar, Virginia Dawson, says negotiations to renew the programme in 2019 are underway, and the response from the Myanmar government has been positive.

Other projects include a winter crop project in Rakhine state, and construction of warehousing for the Red Cross.

"It's often our knowledge, skills, and technology that's more valuable than our money. The sectors when we can really add value are the sectors where we're quite advanced at home.

"The dairy industry in this country is not going to be owned, we hope, by overseas interests.

But critics of the trade focused aid policy disagree.

Peter Adams, former executive director of NZAID (the predecessor to today's MFAT aid program), wrote a column in The Dominion Post in May saying the "very expensive" Myanmar dairy project revealed an aid policy too concerned with pushing the national interest.

Spratt says the programme has a huge "opportunity cost" and while the money spent might make a difference to a few hundred dairy farmers, the impact could be greater elsewhere.

"For that amount of money per year, you could help 400 women with basic maternal and child health interventions, in a country that has a very high maternal and infant mortality rate.

In a country as poor as Myanmar, it's possible to dress up any money spent on development, she says.

"Countries have been giving aid over 70 years now, and we that the most effective and efficient aid is focussed solely on development outcomes. Not on dual benefit, or trying to help the donor as well."

I've also got no problem with aid being spent on economic development, every country needs a thriving private sector. What I have a problem with is using New Zealand aid money to help New Zealand commercial interests."

That's where Fonterra comes in. The global dairy giant sits on the governance board of the Myanmar Dairy Excellence Project to provide technical support and runs a lean office of seven staff on Yangon's waterfront Strand Rd.

With a minimum daily wage of $3.60, milk is a luxury product in Myanmar. Fonterra sells Anlene milk powder at $5.70 for 400 grams, and Anchor butter at $4.50 for 227 grams, through the City Mart supermarket chain.

The co-operative has been working to cultivate a Western-style dairy consumption culture, with a push for brand awareness and an understanding that dairy from pasture-fed cows is "better".

To achieve this, it's helped arrange pastry master classes with the Myanmar Chefs' Association and organized pastry competitions judged by local chefs.

And the beginnings of this Western-style consumption can be seen in the company's collaboration with Singaporean-based bakery franchise BreadTalk, which has a just opened branch in Yangon's Junction City mall.

The bakery is a constant bustle of nouveau-riche, tong-wielding customers collecting all manner of pastries - green tea muffins, hotdog puffs and croissants - under the warm glow of vintage style lights.

Fonterra sells three tonnes of dairy product a month to the store, and consumption jumped 15 percent during an October promotion alone.

"Yangon isn't that big a place. You just need some of these things to take off and suddenly it sparks across the city," Richards says.

Richards declined to reveal what the Myanmar market is worth to Fonterra, but says the food service business expanded 25 percent over the past year. Sales of branded products rose in the "high single digits".

The market for milk products can only grow, as more bakeries open, more tourists visit, and development continues.