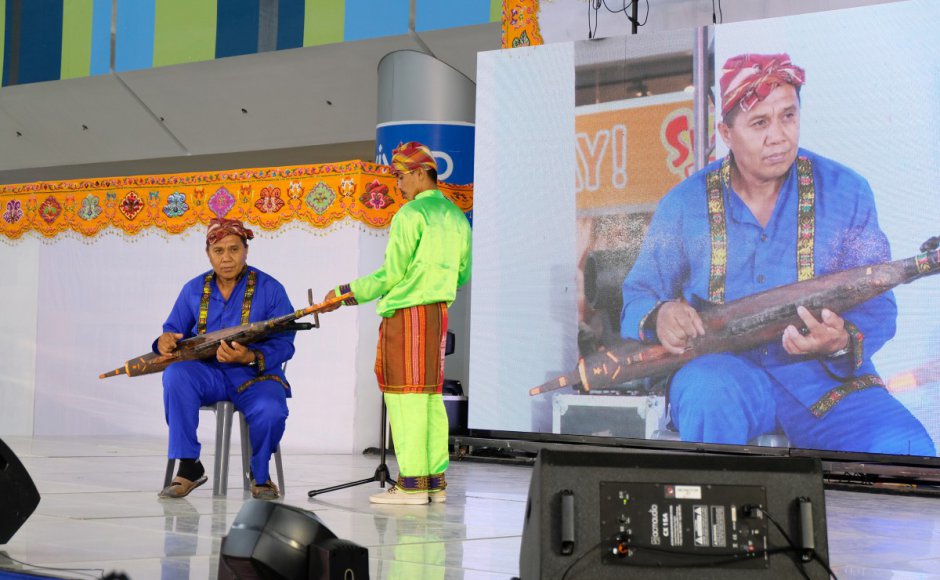 A Muslim Filipino musical expert entertains the crowd of as part of the opening ceremonies of the 1st Budayaw 2017 BIMP-EAGA Festival on Culture and Arts in General Santos City, Philippines on Wednesday, 20 September 2017. Source: Bong Sarmiento

CULTURAL masters from the Brunei Darussalam, Indonesia, Malaysia the Philippines East Asean Growth Area (BIMP-EAGA) have gathered for a five-day festival to showcase their rich heritage and foster greater friendship and harmony among the region’s diverse peoples.

Hundreds of artists and performers are turning out for the inaugural Budayaw 2017 – the BIMP-EAGA Festival on Culture and Arts, which kicked off on Wednesday in the city of General Santos on the southern Philippine island of Mindanao.

BIMP-EAGA was formed in 1994 to help accelerate the growth of less developed areas of the participating member countries.

The sub-grouping’s focus areas are the entire sultanate of Brunei Darussalam; the provinces of Kalimantan, Sulawesi, Maluku and West  Papua in Indonesia;  the states of Sabah and Sarawak and the federal territory of Labuan in Malaysia;  and Mindanao and the province of Palawan in the Philippines.

“Let us take advantage of this opportunity to get to know our neighbours,” said Adel Suemith from the Philippines National Commission for the Culture and the Arts (NCCA) who is head of the BIMP-EAGA socio-cultural pillar on Wednesday. 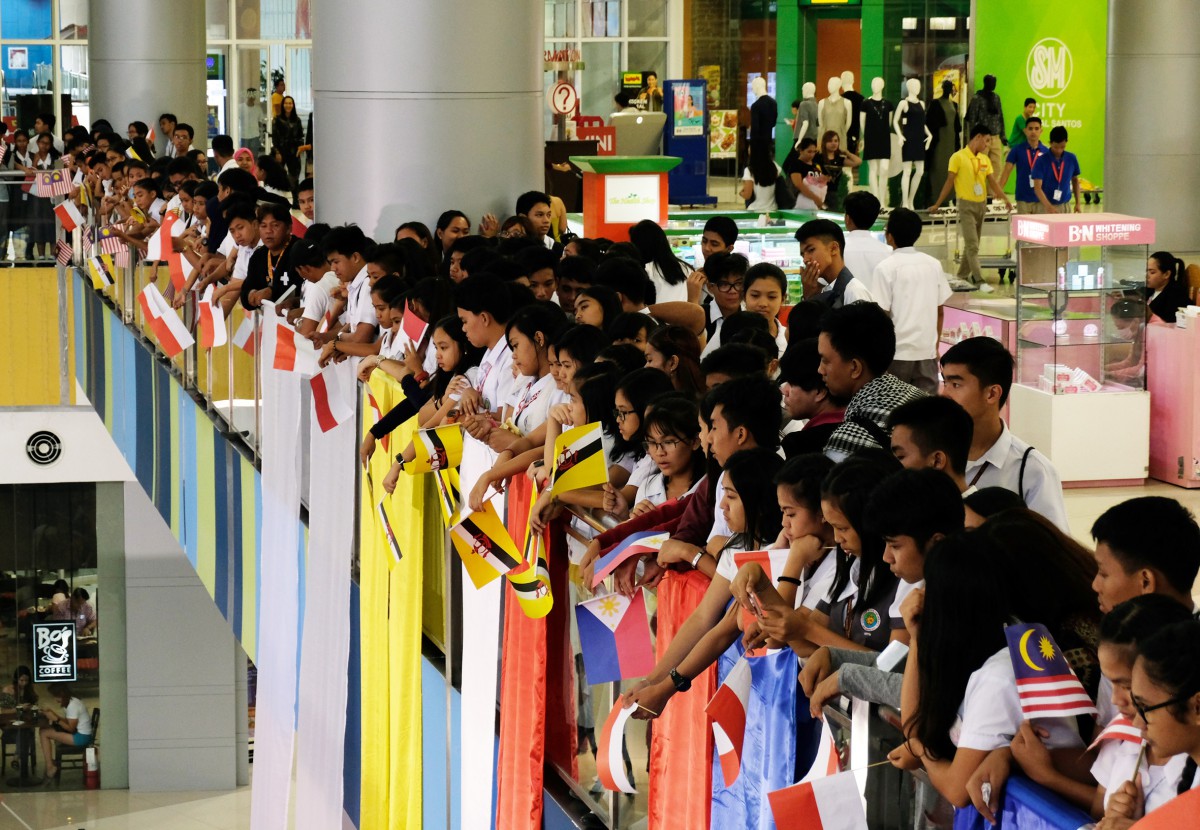 Students hold miniature flags of BIMP-EAGA member-countries during the opening ceremony of the 1st Budayaw 2017 BIMP-EAGA Festival on Culture and Arts in General Santos City, Philippines on Wednesday, on Sept 20, 2017. Source: Bong Sarmiento

The NCCA, in collaboration with other public and private institutions, is spearheading the efforts to make the festival a successful cultural and arts galore, as well as an unforgettable experience not just for the participants but the public in general.

“It is important to remind ourselves how culturally rich we are,” NCCA chair Virgilio Almario said. Brunei, Malaysia and Indonesia send delegations to the Budayaw festival, which is being held as martial law is still in effect in Mindanao.

The name Budayaw is derived from the Malay word budaya meaning culture and the Filipino word dayaw, meaning celebration. Several activities of the first Budayaw festival will also be held in nearby Sarangani province.

With the theme “Taking Pride in the Creative Diversity of the BIMP-EAGA Region,” the festival will showcase the diversity of creative expressions in the subregion.

Engineer Marites Maguindra, chief of the Bureau on Cultural Heritage in the Autonomous Region in Muslim Mindanao (ARMM), said they joined the festival to tell the story of Muslim Filipinos in the country.

The ARMM, which is close to Sabah, hosts over four million Muslim Filipinos. It is considered as the poorest region in the Philippines, largely due to the various Moro rebellions that stunted the economic growth in the area.

The people in the ARMM shares cultural similarities with the people on Borneo island, which straddles Brunei and Malaysia’s Sabah and Sarawak states, due to their proximity.

As part of its participation in the Budayaw festival, the ARMM staged the “Muslims in the Philippines: Culture and History” exhibit that showcased antique swords and jars, among others. 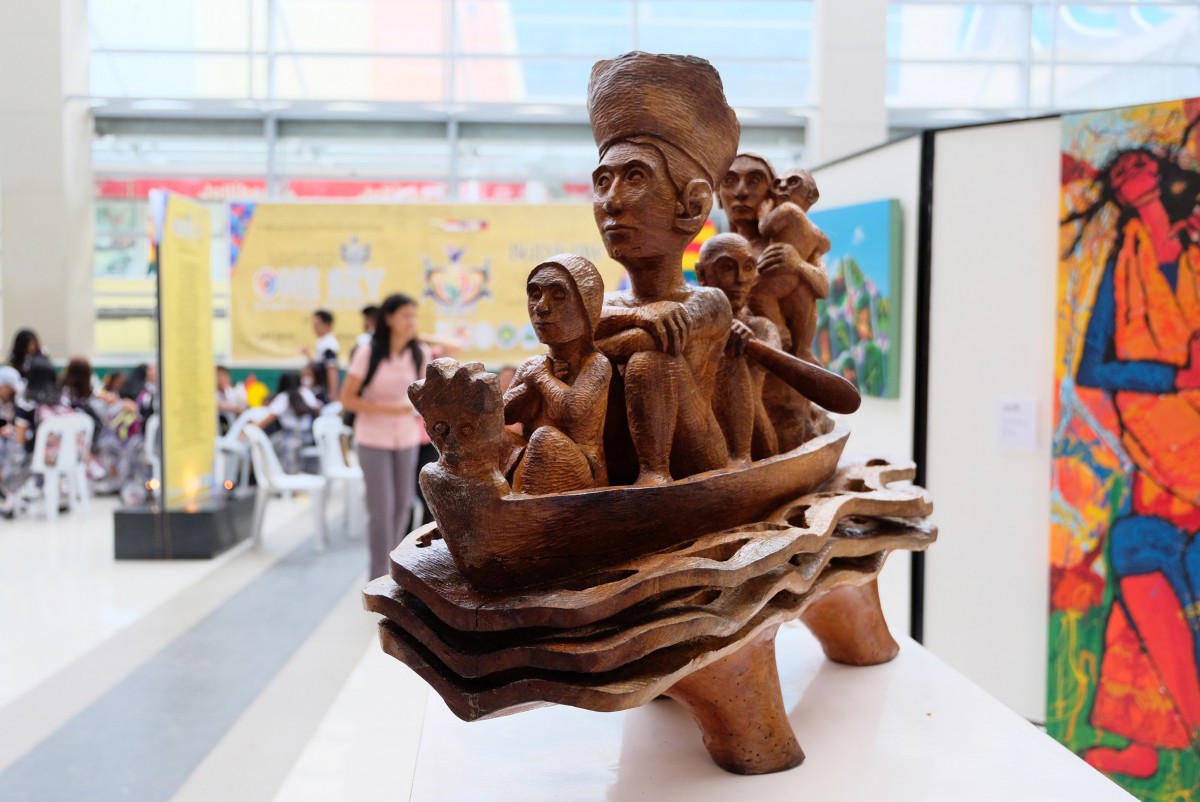 One of the art works on display as part of the 1st Budayaw 2017 BIMP-EAGA Festival on Culture and Arts in General Santos City, Philippines on Sept 20, 2017. Source: Bong Sarmiento

“We are proud of our culture and history. By joining and showcasing artifacts unique to Muslim Filipinos, we are helping shape a better understanding of our region,” Maguindra told Asian Correspondent.

The Philippines was chosen as the festival’s launch pad as part of the 50th anniversary of Asean, which the country is also hosting.

In 2012, during the 10th BIMP-EAGA Summit, the leaders agreed that social and cultural activities can contribute in laying the foundation for greater understanding among the diverse communities within the sub-region.

Thus in 2014, the Socio-cultural and Education Pillar (SCE) was formally added as the fifth pillar of the BIMP-EAGA cooperation.

For the years 2015-2025, the Philippines has committed to implement several projects, including the inventory of artists and cultural organisation in the region, an exhibit of textiles from BIMP-EAGA and the holding of the Budayaw festival.

The Budayaw festival will be held every two years, with hosting to be rotated among the four-member countries.

For Budayaw festival’s first edition, some key events include the “Under One Sky: Visual Arts Exhibition”, an art installation; the Tapestry of Dreams, a weaving demonstration; and the Muslims in the Philippines: Culture and History, an exhibit featuring the heritage of Muslim Filipinos.