The Department of Agrarian Reform (DAR) scaled up urban farming in Manila after its ‘Buhay sa Gulay’ project had its first harvest of fresh vegetables in St. John Bosco Parish in Tondo, Manila on Sunday.

DAR Secretary John Castriciones said the ‘harvest festival’ was a result of the national government, the local government, the church, the private sector, and the community coming together and uniting for a cause. 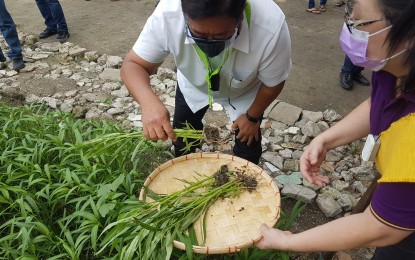 “Natutuwa ako dahil ipinakita dito na pwedeng magtulungan ang simbahan at ang gobyerno para makatulong sa taong bayan (I am happy because this shows that the church and the government can work together to help the people),” Castriciones said in an interview.

The crops that were planted on the first week of December and were harvested on Sunday were mustard (mustasa), snow cabbage (pechay), Chinese kangkong and spinach.

Before the month ends, Castriciones said they are expecting to harvest squash and bottle gourd (upo).

Castriciones said the knowledge on urban farming given to the parishioners of St. John Bosco Parish may also become an alternative livelihood opportunity for them to earn.

Fr. Gaudencio Carandang of St. John Bosco Parish said the present ‘farm’ that yielded a bountiful harvest of vegetables used to be a football field. He said the area was left unused when community quarantines were imposed in Metro Manila. As the parish was giving assistance to neighboring communities, he said a parishioner suggested to them to start planting. Carandang asked Castriciones, who immediately sent a team of farmer-scientists to train their parishioners. Aside from the fresh vegetables to which they can benefit, he said this could also be a source of income.

“A percentage of the earnings from this will go to the parish to help sustain our program and the rest will be divided among those who planted the crops and at the same time, this is a good source of fresh and inexpensive vegetable for the community,” Carandang said in a mix of English and Filipino.

He said the parish caters to about 80,000 individuals in the adjacent 17 barangays.

Meanwhile, Castriciones said DAR will start the same program by next week in Quezon City in coordination with Mayor Joy Belmonte, who already allotted about 7 hectares of land for the project.

Afterward, Caloocan will follow with Mayor Oca Malapitan allotting 1.5 hectares of land for the project.