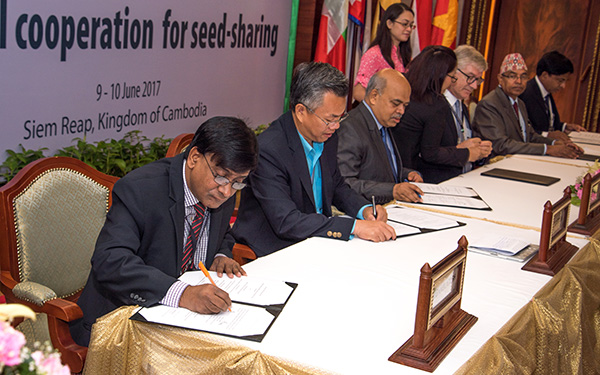 SIEM REAP, Cambodia (9–10 June 2017) - Two more countries have joined a regional seed policy agreement that speeds up the distribution of modern rice varieties across nations in South and Southeast Asia. This agreement was formalized during a meeting of agriculture ministers and representatives of nine countries, titled “Seeds without Borders: Regional cooperation for seed-sharing,” on 9-10 June at Siem Reap.

Originally signed by India, Bangladesh, and Nepal in 2014, the regional seed sharing agreement has now expanded to include Sri Lanka and the Kingdom of Cambodia, the event’s host. Further, the agreement will now expand to include other crops, in addition to rice.

“The workshop on seed policy is timely and critical to initiate the discussion and to build a strong regional cooperation within Southeast Asia and across both South and Southeast Asian regions,” said H.E. Veng Sakhon, Cambodian Minister for Agriculture, Forestry and Fisheries (MAFF). “It provides an effective platform for us to see how we can reciprocally benefit from South Asia’s experiences and information.”

“What we have seen here today is an example of how effective national leadership and vision can lead us to a future where nations are connected by seeds without borders,” said Dr. Matthew Morell, IRRI Director General. “Agro-ecological zones and the effects of climate change don’t stop at borders, so the availability of high-quality seeds shouldn’t either.”

He went on to say, “making a variety of agricultural crops available across borders is a major step forward for farmers and national agricultural systems. The extension of this agreement to include other crops means signatory countries gain an added benefit from the high degree of cooperation that we have already achieved by working together on rice for so many years."

“With IRRI as the broker for the regional seed policy agreement, Cambodia is glad that we are now part of it,” said H.E. Ty Sokhun, MAFF Secretary of State. “We are glad to be IRRI’s partners in developing innovative science and catalyzing these technologies to bring about transformation in policy and in the lives of our farmers and consumers.”

Modern rice varieties such as climate-resilient varieties that withstand drought or salinity, help vulnerable farmers establish a secure food supply for their families as well as added income that they can invest in their own future.

Standard regulatory systems for new rice varieties require multi-season testing to ensure performance, pest and disease resistance and consumption quality. While these processes are important for quality assurance, the process is typically conducted independently by each country. As such, a variety released in one country is still required to go through a similar vetting process in a neighbouring country, increasing the time to market these new rice varieties.

This seed-sharing agreement enables new and better seeds to reach the hands and fields of farmers more rapidly by establishing common parameters for varietal release. In its first 3 years this agreement has enabled eight rice varieties to be released and shared across the three countries.

At this workshop, participants identified a need to establish clarity on intellectual property rights, improved quarantine and seed certification standards, better engagement with the private sector, and expansion to other agricultural food crops to move the regional seed agreement forward further still.

Sh. Shobhana K. Pattanayak, Secretary of the agricultural department under India’s Ministry of Agriculture and Farmers Welfare, believes that having more nations join the agreement for sharing seeds is a good demonstration of regional cooperation that other parts of the world can emulate. Equally, Dr. Morell stated that IRRI remains committed to working with country partners to usher in economic and social growth as well as regional and global food security. 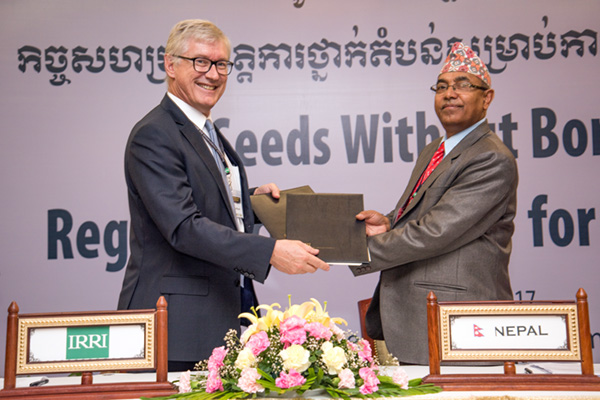 The workshop also included a signing ceremony of a Memorandum of Understanding between the Government of Nepal and IRRI. More than a renewal of a former agreement, the MOU reaffirms a strengthened commitment to continue working together, deepening the two parties’ relations and allowing for a larger operational presence in the country.

“Nepal has always kept IRRI in high regard due to IRRI’s continuous support for our rice research and development,” stated Dr. Suroj Pokhrel, Secretary of the agricultural and development ministry of Nepal.

Following from this workshop, IRRI will continue to actively engage with the signatory countries to move forward on the identified areas of development for the agreement. 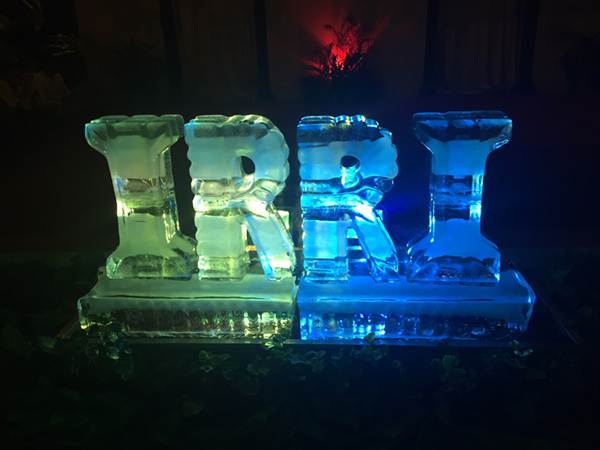 During the welcome dinner hosted by the Cambodian Ministry of Agriculture, Forestry and Fisheries, a two-foot tall ice sculpture of IRRI served as the venue centerpiece.