COVID-19 is another wake up call for food security 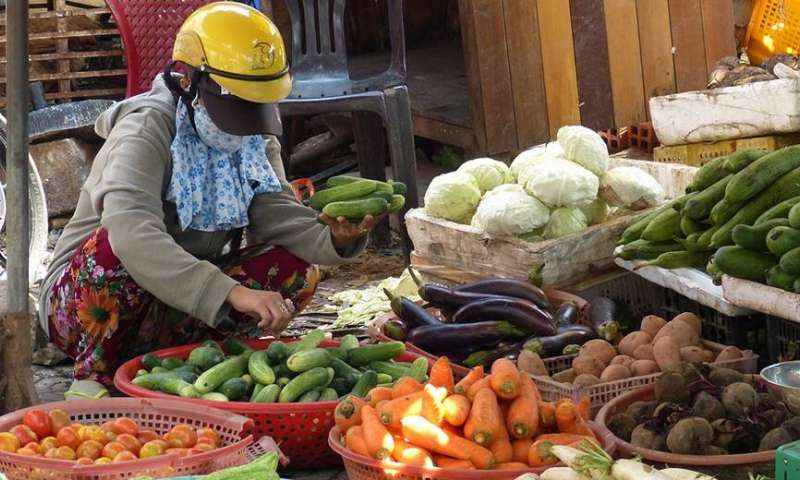 Food security is one of the issues that have emerged in the face of the lockdowns across the Asia-Pacific region. Credit: falco from Pixabay

With lockdowns ordered to contain the COVID-19 pandemic—that has reached 183 countries, infected over 1.7 million people and caused over 100,000 deaths—there are fears of food shortages caused by panic buying and supply chain disruptions.

Recent announcements by some countries that they are initiating export restrictions of food products or reviewing export agreements have brought back memories of the 2007—2008 food crisis when there was an interruption to global food supply chains as several key countries limited exports of rice and wheat. This unleashed a series of events around the world, including food shortages, price spikes and civil disobedience in over 30 countries.

The pandemic is now generally viewed as an existential crisis and, in times of crisis, it is often difficult to separate facts from sensationalism.

What is known about the effect of COVID-19 on food security until now? Food security is the multidimensional complex of making food available (by growing, imports or stockpiles), ensuring physical access (moving food from where it is produced to where it is consumed), ensuring affordable prices (no price hikes), safeguarding food safety and nutrition value, and assuring stability in all these dimensions.

Food availability and access at the cross-country level has not been noticeably affected even though time-bound export restrictions have been imposed by countries like Kazakhstan on wheat flour, Serbia on sunflower oil, Thailand on eggs; but these do not contribute significantly to the global markets.

Two credible organizations—the Food and Agriculture Organization (FAO) and the International Food Policy Research Institute (IFPRI)—have both publicly said that there are enough stocks globally of staples like wheat and rice, for the rest of 2020. Unless the big players like the US, European Union, Russia, and Ukraine start limiting wheat, and principal rice exporters like India, Thailand, Vietnam, Pakistan, and the US start limiting rice, supply chains should remain relatively free-flowing.

However, at the intra-country level, COVID-19 has had effects that are being felt. Some of these effects are not directly attributable to virus infection but to the preventive measures taken to avoid escalation of infection.

For example, the "lockdowns" in India and Malaysia which prevented all movement within and out of the country, spurred fears of supply disruptions. Indian and Filipino farmers have had to dump their produce or feed it to livestock because of incapacity to transport them to urban markets. Singaporeans feared that fresh vegetables, eggs, and chicken would not be allowed into Singapore by Malaysia, a major supplier. The net result was a surge of panic buying of these items and the clearing out of grocery shelves until government announcements and visual evidence of food trucks entering the country helped assure the public and bring matters back to normalcy.

In other countries, the shortage of labor to grow, process and handle food has been hampered due to so-called "social distancing" measures being enforced. This current issue is likely to affect supplies in the near-future as ripe crops are not harvested (increasing loss and wastage) and next-generation crops and animals are not put into their growing cycles. North America reportedly is facing a major problem with migrant labor for these two purposes.

In general, any restriction on transportation, including the movement of food and people involved in the food industry, will have a severe dampening effect on food supply, as was evidenced in many parts of China during its crisis.

Similarly, in China, "lockdowns" prevented vital inputs from reaching farmers who had to plant their crops for the next season. Authorities then made allowances for "green channels" which exempted the movement of agricultural inputs like fertilizer and seed.

Other visible effects of movement restriction have caused decreased availability of fresh produce like vegetables and fruits to consumers, and correspondingly, imposing financial pain to producers and preventing physical access to food, one of the important dimensions of food security.

Fortunately, unlike the 2007-08 crisis, incidences of price hikes are still relatively low, as are problems of food safety.

With respect to food, almost none of the net exporting countries have reneged on their supply contracts, although in large agricultural countries like the US and Canada, farm groups have warned of the impact of reduced harvest from current crops and reduced plantings of some crops due to reduced demand.

For Asia, only one of the top five rice exporters, Vietnam, has announced plans to hold future contracts while minor exporters like Cambodia and Myanmar have put temporary restraints in place.

In general, food availability and access seem unaffected in most countries, although some are having intra-country supply disruptions due to movement control. Many governments have taken visible action to assure their citizens that food stocks are sufficient, yet temporary shortages have resulted from panic buying.

COVID-19 has elicited an unexpected response on the part of the public to stock up extra amounts of food, thereby setting off a self-fulfilling vicious circle of transient shortages. This may even force governments to go into the marketplace in order to build up their stockpiles in anticipation of shortages.

This pandemic has revealed how vulnerable some countries are on food security. Philippines and Singapore have used this crisis to spur self-production, such as through increasing urban farming of vegetables. Singapore is purportedly accelerating its goal of meeting 30 percent of its nutrition needs by 2030 and backing it with significant investments. Hong Kong has seen an increased demand for its existing urban vegetable farms which in turn have intensified planting.

As a food import-dependent country, Singapore is also exemplifying new measures to keep open supply routes, such as in the recently concluded Supply Chain Connectivity Agreement with six exporting countries. Experts have also called for more action to produce alternative food such as "cultured meat" and plant-based protein to ameliorate supply chain disruptions.

But the crisis is also forcing the global community to ask if the current long and energy-demanding food supply chains should be replaced by more locally produced food. In India, the crisis has seen the reverse migration of millions from urban to rural areas. How can these millions be incentivized to remain and produce food in the countryside, albeit in a profitable manner, through increased government investments in agriculture?

Accompanying this are questions on how to increase significantly agricultural R&D in developing countries, which pales in comparison to that in developed countries.

The COVID-19 pandemic is likely not an isolated crisis causing food insecurity. At a time when many countries tend to look inwards, it is exactly the opposite that has to be done to ensure food security for all.

The IFPRI did extensive studies post the 2007-08 crisis and warned that inappropriate, self-serving policies and non-transparent actions could have unintended consequences such as causing runs on food imports or restrictions of food exports leading to more generalized, artificial shortages and price hikes. Governments at the regional and global levels need to increase cooperation and coordination in all the dimensions of food security. By doing so, countries benefit from others and improve their local capacity to produce more.

Food security for any country can only be assured by a balance of self-production, imports, and stockpiles. It is understandable that governments aspire to be fully self-sufficient, but this should still be weighed carefully against the opportunity costs of doing so and the effect it may have on overall economic development.