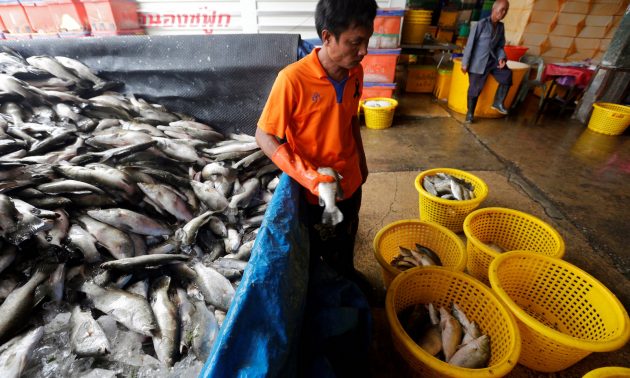 Escalating tensions over fishing rights in the South China Sea may be a harbinger of stormy seas ahead as more of Southeast Asia’s trawler fleet casts its half-empty nets in contested waters.

Indonesia’s navy fired shots at a Vietnamese fishing vessel in late July in the second clash between the two countries over trawler access since May. Vietnam says four fishermen were wounded, though that account is disputed by the Indonesian authorities.

There have been similar incidents in the past year involving fishing vessels from Thailand, China, Taiwan, Malaysia, the Philippines, Myanmar and Taiwan. Indonesia claims that 10,000 foreign ships were fishing in its territory before naval patrols were stepped up.

Trawlers are pushing the boundaries – most poorly defined at best – because catches in marine habitats and inland waterways closer to home are no longer viable. Without more sustainable practices there will even be questions over the region’s sprawling aquaculture farms, which have been helping to plug supply gaps.

A recent study by the Organization for Economic Cooperation and Development and the Food & Agriculture Organization forecast annual output by the 14.5 million fishers will grow by a meagre 1.2% over the next decade, down from 3.6% in the past 15 years.

By 2050, the industry’s production will be growing by just 0.2% a year, according to a separate report by the International Food Policy Research Institute and World Fish, with marine catches no longer expanding at all. By then aquaculture will be contributing more than 50% of total output, up from less than 40% at present. 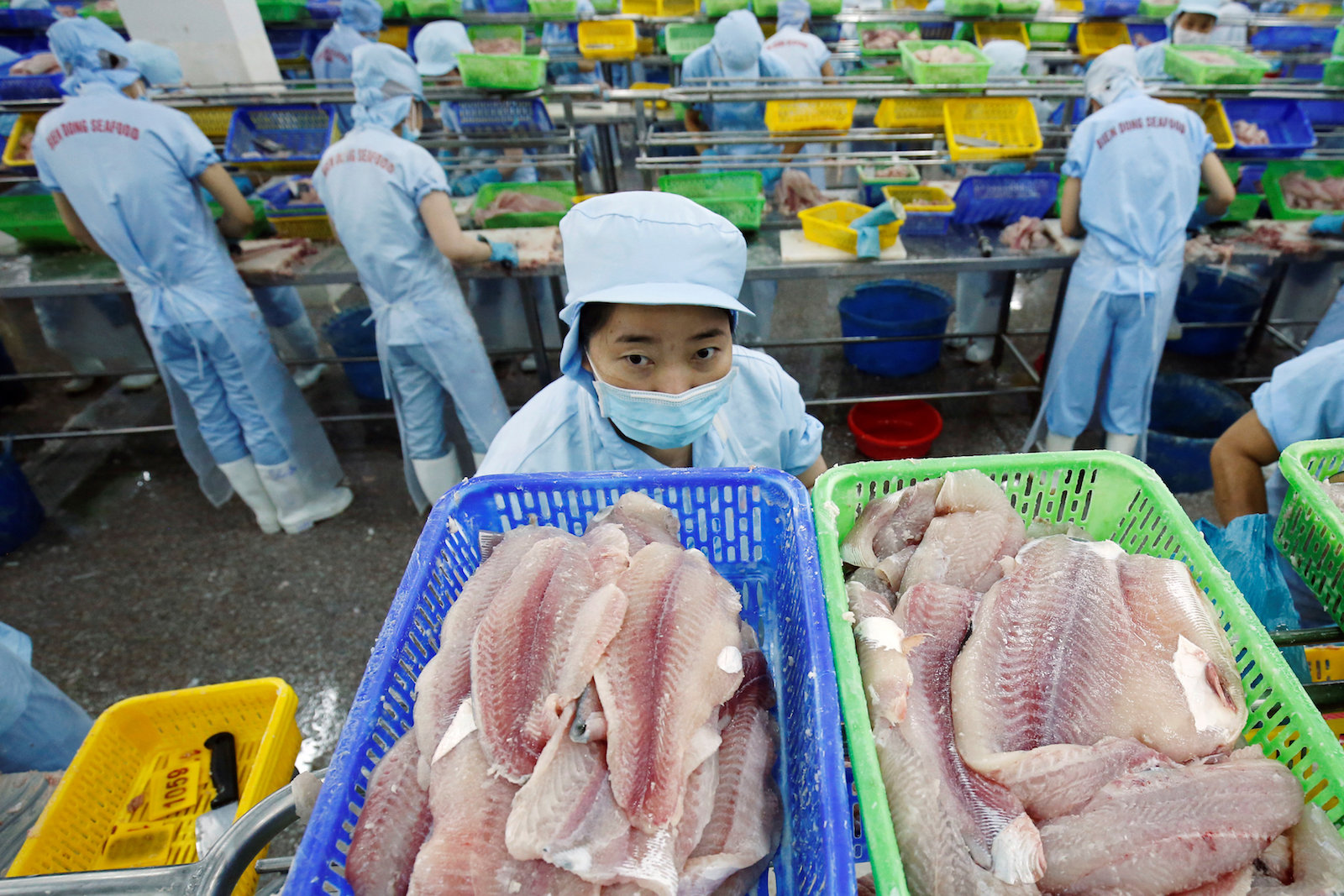 Workers make fillets of Swai fish at a Bien Dong Seafood Company factory in the southern Vietnam city of Can Tho, July 7, 2017. Photo: Reuters/Kham

These are troubling figures for the region, given that fish and seafood shipments were the second-biggest source of food export earnings in 2014, according to most recent data, and accounted for 15% of global supplies. Vietnam and Thailand are the third- and fourth-biggest exporters in the world and Indonesia is also in the top ten.

Fish provides a livelihood for millions and is crucial to Southeast Asia’s nutrition and food security, supplying 42% of individual animal protein intake. The average person consumes about 36 kilograms of fish and seafood a year, double the world standard.

Most countries will experience slower population growth in coming decades due to aging and the impact of urbanization, but demand for fish will remain constant because of rising prosperity, which typically draws consumers into a more protein-rich diet.

Sustainability concerns have been around for years and were one reason countries like Indonesia, Thailand and Vietnam switched their investment focus to inland aquaculture: output at these farms grew by 460%, or 12.4% a year, from 2000-2015.

However, much of this surge resulted from over-intensive farming practices, which are now facing their own sustainability challenges. Land availability for farms is shrinking due to population pressures and an environmental backlash over the destruction of coastal habitat, especially mangroves. 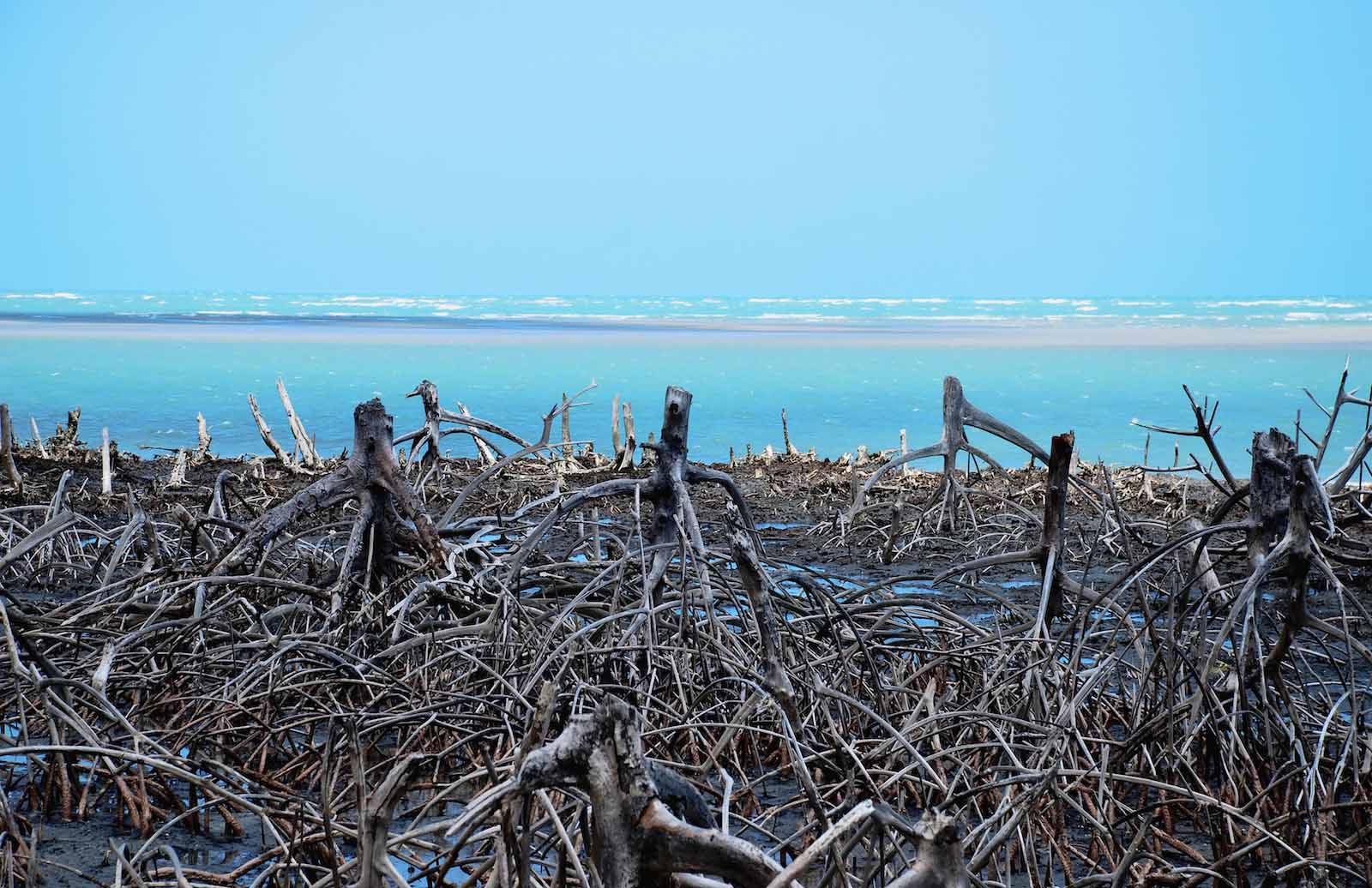 Diseases have ravaged fish stock in some farms, tarnishing the industry’s image abroad. Countries with accessible coastlines have moved operations offshore, helping to offset slower activity elsewhere. Output is expected to rise by 37% in Indonesia in the next decade and 47% in Cambodia.

Inland waterways, which have been fished by small family groups for eons, are fighting a losing battle with upstream dam builders and toxic waste from households and factories. The exploitation of dwindling water supplies is also destroying diversity.

Cambodia’s vast Tonle Sap lake, which helps sustain more than three million people and provides 75% of national protein, is now beyond recovery because seasonal floods that bring nutrients from the Mekong and replenish fish stocks are being disrupted by climate change and upstream dams. A global symposium last week heard fishing output could fall by up to 70% from current levels by 2040.

The region’s ability to meet these challenges is questionable. OECD modeling suggests that no regional country is providing an enabling environment for sustainability, including governance, regulations controlling land use, water and biodiversity, and investment in infrastructure and research. Malaysia, Thailand and Indonesia do meet some basic infrastructure requirements.

This will not have escaped the attention of governments and consumer groups abroad, which have been pressuring major producers to get their act together.

Thailand has been put on notice by the European Commission (EC) to eliminate “destructive” fishing practices, including over-fishing and labor abuses, by 2019 or face export sanctions. Cambodia was blacklisted by the EC in 2014 but the Philippines had its listing revoked after instituting changes.

Last month, Thailand’s leading seafood exporter Thai Union Group said it would overhaul its fishing practices in conjunction with Greenpeace, including a reduction in the use of fish aggregating devices and longline fishing, which have been criticized for causing over-fishing.

The industry’s hold on domestic markets is also becoming more tenuous, with lower cost competitors from China making a serious dent in sales in the first quarter. Imports of processed seafood from Chinese producers rose by 32.6% in volume and 7.9% in value, offering a glimpse of what Southeast Asia can expect if it fails to protect an increasingly exposed fishing trade.