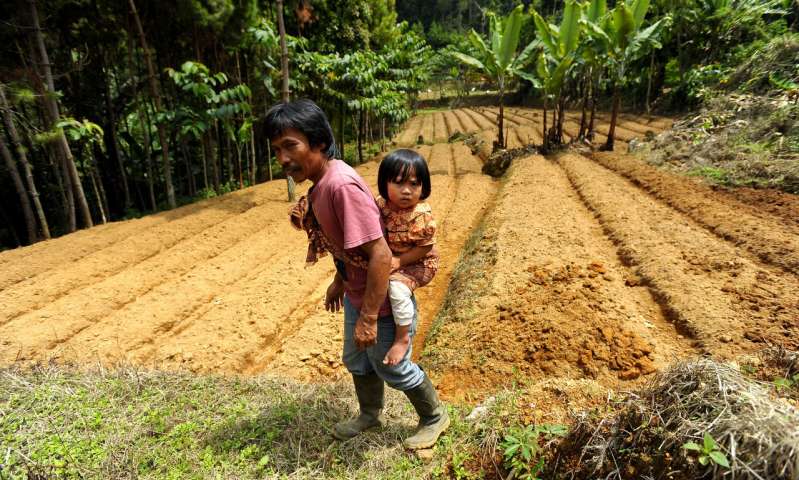 A first-of-its-kind global study shows that children in 27 developing countries have better nutrition--when they live near forests. The results challenge the assumption that improving nutrition in poorer countries requires clearing forests--and, instead, suggest that forest conservation could be a powerful tool for improving the nutrition of children. Led by researchers at the University of Vermont's Gund Institute for Environment, the study was published by the journal Science Advances on Aug. 15, 2018. Credit: Ricky Martin/CIFOR

A first-of-its-kind global study shows that children in 27 developing countries have better nutrition—when they live near forests.

The results turn on its head the common assumption that improving nutrition in poorer countries requires clearing forests for more farmland—and, instead, suggest that forest conservation could be an important tool for aid agencies seeking to improve the nutrition of children.

The results were published on August 15 in the journal Science Advances.

More than two billion people in the developing world suffer from a lack of micronutrients—like vitamin A, sodium, iron and calcium. The result for children can be brain damage, stunted growth, and even death.

In response, food and farming programs have begun to consider how to do more than just increase production of staple crops, like rice and corn, to fight malnutrition. There is a growing global awareness that the fight against hunger requires getting people a larger range of nutrients needed to thrive.

The new study, led by a team at the University of Vermont's Gund Institute for Environment, examined data on children's diets from 43,000 households across four continents. They found that being close to forests caused children to have at least 25% greater diversity in their diets compared to kids who lived farther away from forests.

"This is a powerful, actionable result," says Taylor Ricketts, director of UVM's Gund Institute and senior author on the paper. "It's comparable to the impacts of some nutrition-focused agricultural programs."

For example, the results of the new forest study are very similar to the results of an effort to introduce a fortified sweet potato in drought-prone areas of Mozambique and of a homestead food production program in Cambodia. In other words, protecting forests could be a central piece in integrated efforts to promote better nutrition.

Other recent studies have also suggested that forests help reduce micronutrient deficiency by increasing dietary diversity. "But their evidence has been mostly based on local case studies or simple correlations," says Rasolofoson. "These are of limited use in forming a global view and in forming global policies."

In contrast, the new study examined data for a huge diversity of households—in the Caribbean, South America, sub-Saharan Africa, Eastern Europe, Nepal, Bangladesh, Cambodia, and the Philippines—that were both close to and far away from forests. By painstakingly accounting for variables that could hide or mimic the impact of forests, the team of scientists was able to show that in otherwise similar households, the ones within or nearer to forests had better nutrition, on average, than those farther away.

Overall, the study reveals a global signal showing that forests can improve nutrition through numerous pathways. These include: providing a range of foods gathered in forests, benefits from wild pollinators that live in forests, income from forests products to buy food, and more productive use of mothers' time—all of which can promote greater dietary diversity.

The team also took a closer look at a group of African countries, which added detail to their portrait of how forests help.

"We discovered that the positive effect of forests is greater for poor communities," says Rasolofoson, a post-doctoral researcher at UVM who grew up in Madagascar. "But communities need at least some access to roads, markets, and education in order to get the most benefit from their forests."

Additionally, the study presents evidence that forests can reduce vitamin A and iron deficiencies.

The team built their study and models from data—about children under the age of five— gathered by the U.S. Agency for International Development (USAID) between 2000 and 2013. The massive database enables researchers to study global links between health and the environment. The database features 30 years of USAID demographic and health surveys, with 150 variables for 500,000 households, to which the research team added spatial data on the environment.

Forest conservation and children's health have not often been seen as closely aligned issues.

"Our study shows that conservation and health can go hand in hand," says Brendan Fisher, a professor in UVM's Environmental Program in the Rubenstein School of Environment and Natural Resources, and a co-author on the new research.

The proven benefits of forest conservation include supporting the livelihoods of local communities, helping to slow climate change, and protecting wildlife. Now the new study adds strong evidence that forests promote the health of children through improved nutrition.

"Economic development and forest conservation are typically thought of as trade-offs—that leaders have to prioritize one or the other. This study helps to show that's just not always, or even usually, true. More often than we think, it's a false choice," says Taylor Ricketts.

"This study is a wake-up call that people who work on forest conservation and those that work on improving children's health should be working together and coordinating what they do," says Brendan Fisher, a Fellow at UVM's Gund Institute. "We are now seeing a lot more examples of how an integrated approach to some of the world's most pressing problems pays double dividends."