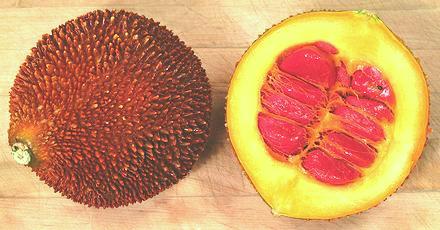 (File pix) A ripe gac fruit that has been cut. Pix courtesy of UMT

Gac fruit, or its scientific name Momordica cochinchinensis, is known as ‘the fruit from heaven’ in Southeast Asia due to its acclaimed properties in enhancing longevity, vigor, and vitality.

To the orang asli community, gac is valued for many important health benefits. Grown in Vietnam, the fruit is also found in other areas of South Asia.

In traditional Chinese medicine, gac goes by the name “Mubiezi”, and is thought to have resolvent and cooling properties, and are used for liver and spleen disorders, wounds, hemorrhoids, bruises, swelling, and pus.

The Vietnamese often use gac as a coloring agent in a dish called “xoi gac” giving the rice - which is usually served at weddings, new year festivities and special occasions -red color and distinct flavor.

However, the gac fruit has not received due attention or been seen as popular as other fruits due to the lack of awareness of its health value and seasonal production.

In observing this, Azimah Hamidon ― a doctoral candidate in crop science (horticulture) at Universiti Malaysia Terengganu’s (UMT) School of Food Science and Technology ― decided to conduct a research study on gac crops.

After discussions with her supervisor Dr. Ramisah Mohd Shah, she hopes to bring to light cultivation methods needed to be developed to suit small and large-scale production of the unique nutritional fruit.

According to Azimah, the findings of the research which she kicked off January last year would be beneficial for farmers who would like to grow the crop commercially.

“Gac has a high nutritional value and is becoming known as a premier source of carotenoids, especially beta-carotene and lycopene.

Many products can be produced from gac such as oil and natural coloring,” she shared.

“I use reproduction techniques and a planting method that uses different concentrations of rooting hormones, to establish the fertilizer requirement of gac fruit production as the subject of this research,” Azimah explained.

She said most Momordica species prefer a well-drained sandy loam soil that is rich in humus or organic matter. Though, the types and quantity of fertilizer needed for gac fruit depends on the soil type and amount of nutrients already available in the soil.

The production of gac fruits is often low because it is a dioecious plant where hand pollination is required to increase fruit set. Furthermore, the development of female flowers are quite slow and production ratio to male flowers is lower.

“Cultivation methods need to be developed to suit small and large-scale production and must consider the unpredictable ratio of male to female plants grown from seed, and slow flowering induction,” she said.

She highlighted that experimental data and information on vegetative propagation, nutrients, cultivation requirements and disease associated with gac fruit are not very extensive.

“Therefore, the objectives of the study are to determine the effects of different concentrations of rooting hormones, to establish fertilizer requirement of gac fruit production planted in mineral and BRIS soil and to study the involvement of plant hormone in promoting female and male flower development in gac fruit. The development of post-harvest disease symptom during storage will also be observed throughout the experimental period,” she said.

Azimah hopes to complete her research on gac by year-end.