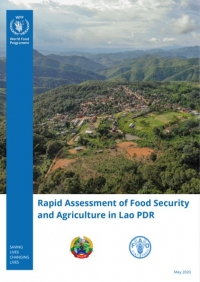 While there have been just 19 confirmed cases of the Coronavirus Disease 2019 (COVID19) to date in Lao PDR, the country – as with other countries around the world – has been affected by secondary social and economic impacts as a result of measures instituted to stop the spread of the virus. This survey seeks to measure the impact of the crisis on food security and agriculture in order to identify bottlenecks and affected populations/provinces, and ultimately guide any required response.

The survey was conducted by phone from 21 – 30 April 2020. This period followed the Pi Mai (Lao New Year) holidays from 13 – 16 April 2020. Full “lockdown” measures (including restrictions on international and inter-provincial travel, as well as the closing of many businesses) were in place from 30 March 2020 until 3 May 2020. As such, we can expect that the full impact of these measures was being felt during the survey period.

A total of 1,007 completed interviews were conducted, covering all 17 provinces and Vientiane Capital. While there are limitations to this study including small sample sizes in some provinces, the study sought to capture the perceptions of local “experts” with an informed understanding of the situation.

Some key findings by sector include the following: