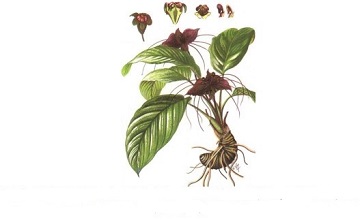 Tacca plant or known by the scientific name of Tacca chantrieri was a rare ornamental plant which had the potential as an anti-cancer drug. Tacca was widely used as a traditional medicine in the tropical Asian countries. Chinese and Thailand communities had long used their Rizhoma as the traditional medicine. The contents of the chantriolida, the evelynin, and the taccalonolida which could be used in the cancer cure therapy, because it was toxic to the cancer cells.

The flower of this plant had a large flower crown and a long filiform that hung under the flower. This flower crown was maroon to black and shaped like a unique bat, making it desirable as an ornamental plant. Generally, this plant was propagated by the seed, the separation of seedling, and the stem cuttings. However, the plants and seeds had already been very difficult to find due to the habitat destruction, the land clearing and the forest fragmentation. Other than that, the low seed germination (12 percent) and the small seedling as well as its prolonged breeding time became the obstacles in its conservation and development.

Rahayu, Rezky, Nikko and Rizkiya, the students of the Department of Agronomy and Horticulture, the Faculty of Agriculture (Faperta), Bogor Agricultural University (IPB) found out how to solve the problem. Those who were incorporated in the Student Creativity Program (PKM) conducted the research titled “Konservasi In Vitro Tacca Chantrieri Andre Aksesi Kalimantan sebagai Penghasil Zat Anti Kanker / Conservation of In Vitro Tacca Chantrieri Andre Accession of Kalimantan as the Producer of Anti-Cancer Substance ”.

Rahayu Ning Janati said, in this research, they would study the optimal method of the planting of In Vitro (laboratory scale) to produce many seeds and uniforms in a short time. “We also will do the analysis of the anti-cancer drug ingredient of the chantriolida, the evelynin, the saponin, and the taccalonida on the plant,” she said.

She said that the culture of In Vitro was considered as the fast technique which could produce the plants of Tacca in large quantities in a short time. They conducted this research in the Tissue Culture Laboratory, the Department of Agronomy and Horticulture of IPB. “The propagation of Tacca plant in the laboratory is done in two types of seeds, namely the young seed and the old seed using the tissue culture method. After the seed obtained from the tissue culture, then it is done the planting on the media that has been set its nutrient. Further, the observation is conducted for three months,” said Rahayu, the Chairman of PKM.