Durian: the foul-smelling fruit that could make Malaysia millions

Often reviled for its pungent odor, the crop has become a delicacy in China – and export demand is rocketing. 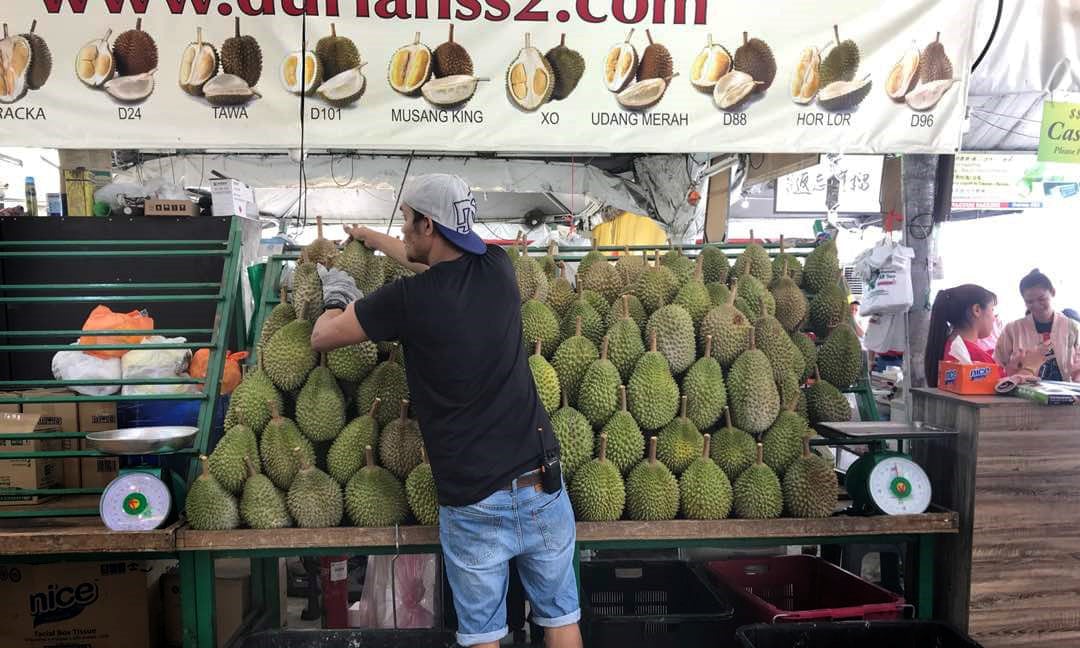 Durian for sale in a market in Petaling Jaya, Malaysia Photograph: Emily Chow/Reuters

High up in the lush green mountains of Raub, you can smell them before you see them. The pungent waft in the morning breeze comes as quickly as it goes, but there is no mistaking: this part of Malaysia is the land of the durian.

Called the “king of fruits” by 19th-century British naturalist Alfred Russel Wallace, durian’s overpowering smell – fragrant to some noses, putrid to others – has led it to be banned from hotels and public transport across Asia, and has even prompted evacuations from airports and hospitals. However, in China something of a cultish national obsession with durian has grown in the past few years, particularly around the Musang King variety, grown almost entirely in Malaysia.

And where there is Chinese appetite, there is money. In the highlands of Raub, and all across the south-east Asian country, farmers and landowners are tearing up traditional rubber and palm oil crops to harvest this mutant-looking native fruit instead.

“When I started out, people all told me there was no money in durian, but that couldn’t be more different now,” said Lindsay Gasik, who has written a book on the fruit and runs durian tours across Asia.

“I treat durian like a wine because it is like a wine – it is a living organism that changes and ferments over its lifespan, so you can really do a lot with the flavor. I think that’s what makes people so obsessive over it.”

Durian’s distinctive smell is infamous, but its flavor – at once sweet and savory – adds to its divisiveness. Wallace described it as a “rich custard highly flavored with almonds”. Feet, butterscotch pudding, ice cream, and rotting eggs have also been used as comparisons.

Whatever it is, Chinese consumers love it: durian cakes, ice-cream, and sweets are all the rage and several restaurants even specialize in durian pizza. The demand has driven up the price of durian by up to 20 times over the past four years. 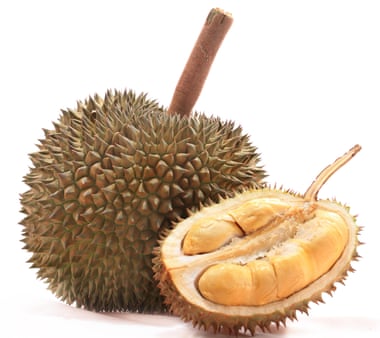 In Malaysia, farmers are rubbing their hands. Thailand is currently the only country allowed to export whole durian to China, either fresh or frozen, but a new deal struck between the Malaysian and Chinese governments will enable Malaysian farmers to export whole frozen durian directly for the first time from January next year, tapping into a market currently worth nearly £400m and rising.

While the durian export market is very new in Malaysia – the first exports only began around 2012 – the government is pushing for the Musang King to become one of the country’s biggest exports, hoping for a 50% jump in exports by 2030, almost entirely to China. Some predict it could become more lucrative for Malaysia than palm oil.

Even Malaysia’s prime minister, Mahathir Mohamad, has seized upon it. “I feel it is time that we produce durians on a large-scale and systematic manner. In China alone there are 1.4 billion people who enjoy the fruit,” he has said.

Adrian Yeo, who now owns six Musang King durian farms across Raub as part of his company, Durian Wonderland, is one of those investing in the crop and says the opening up of the China market in 2019 will “have a huge impact”. In anticipation, he planted 81 acres of durian last year and his farmers are in the process of planting 5,000 new trees, mostly Musang King but also a “hot” new variety called Black Thorn, all in anticipation of Chinese demand.

“In China, durian has become a status symbol and the demand is huge, especially among the younger generation,” said Yeo. “In Malaysia, I would say the focus in the durian market is 90% on China now.”

A decade ago Malaysia’s much-maligned durian farmers were lucky to get two ringgit (37p) per kilogram for their product, but now Musang King can go for up to 60 ringgit (£11) per kilo – far more lucrative than both palm oil and rubber, whose prices have slumped in the past few years. Evidence of rubber trees being swapped for durian was evident across the farms of Raub.

Yet as the head farmer of Durian Wonderland, Fatt Husiasoonhuat, emphasized, growing durian is a “delicate art” and “takes a lot of time and care, much more than palm oil trees”. Walking up the steep hill of the Sungai Ruan orchard, where Musang King fruits hung from the trees like pungent grenades, he pointed to the green string that had been individually hand-tied from the branches to each fruit.

“In Malaysia, we don’t pluck the durian from the tree, we wait for them to fall off naturally so the flavor is ripe,” he explained. “In the old times we would just collect them from the floor, but if we want to export them to China they can’t touch the ground. So we tie them with string, which catches them.”

Dogs also roam around the farm to ward off monkeys, who don’t like eating durian but do enjoy picking them from the tree and smashing them on the ground. 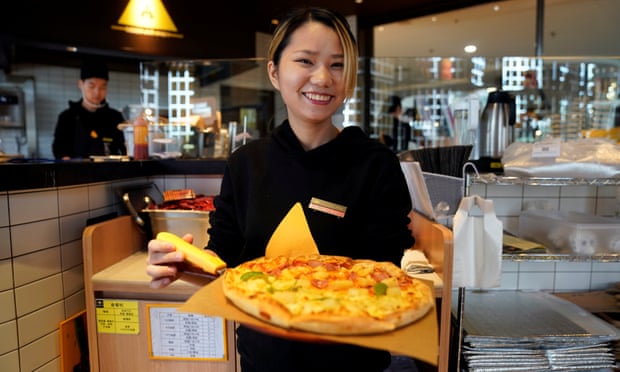 A durian pizza at a restaurant in Shanghai. Photograph: Aly Song/Reuters

Once the ripe durian is carefully lowered to the ground by the farmers, it is rushed to the deep freeze within two hours, where it is frozen at -70C to keep it fresh for export.

Nonetheless, the surge in durian farming has raised some environmental concerns – mainly that jungle land is being cleared to make way for plantations.

Sheema Abdul Aziz, president of environmental group Rimba, expressed concern about durian-driven deforestation in Malaysia and said that in the end, the farmers were “shooting themselves in the foot”.

“This not only causes the destruction of critical habitat for wide-ranging animals such as tigers, elephants, primates, and hornbills,” said Aziz. “It also reduces the numbers of the very pollinators that are necessary for durian fruit production, and which the durian industry therefore heavily relies on for profit.”