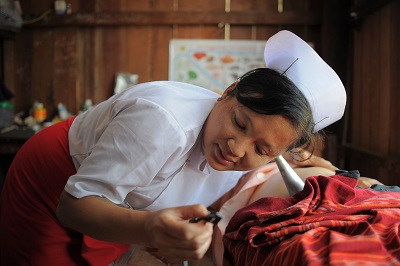 A midwife provides a regular health check for a pregnant woman in Tone Le Village, Tone Le Sub Centre, Nyaung Shwe Township, Shan State, Myanmar.YANGON, Myanmar - Investments in the health, nutrition and well-being of the youngest children in Myanmar are yielding dividends, UNICEF said as momentum is building up towards the global celebration of Father’s Day on 18 June.

In recent years, children in Myanmar have benefitted from dramatic increases in exclusive breastfeeding rates - from 27 per cent in 2009 to 51 per cent in 2016. There has also been a rise in improved coverage and quality of health care resulting from the establishment of 4,451 health facilities and the training of 4,500 midwives in emergency obstetric and newborn care.

Investments over the last two years in improving methods of transporting and maintaining vaccines – the first such substantial investments in a decade – mean that children are now more effectively and regularly protected from life threatening childhood illnesses.

“Early moments matter, so the strong push over the last two years by the Government of Myanmar and its partners to improve the lives of infants and young children and to encourage their development is very important,” said Bertrand Bainvel, UNICEF Representative to Myanmar. “Thanks to these investments, the vast majority of children in Myanmar today experience a much better start to life than was the case a decade ago.”

Brain development in young children is influenced by a range of factors, such as breastfeeding, nutrition, stimulation, nurturing, supportive environments and high quality public services like health care. Nationwide social protection services also help vulnerable families ensure their children stand the greatest chance to prosper in life, and so are a form of cognitive capital that will pay dividends to children, families and countries as these children grow and interact with their environment.

Among other recent achievements that will help children are the new Community Infant and Young Child Feeding (CIYCF) guidelines, the introduction of new life-saving childhood vaccines in 2015 and 2016, work to establish newborn care corners in 500 health centres and 50 primary hospitals across the country, and the targeted efforts by Government and partners to improve the quality of care at referral hospitals in those three regions with the highest numbers of child deaths will reduce the under 5 mortality  and malnutrition rates that are too high.

“New initiatives in health education and early childhood care are also encouraging and empowering Myanmar’s parents to provide their children with the love and care they need,” said Bainvel. “The celebration of Father’s Day in Myanmar is an opportunity to stress the importance to children’s development of their families, and to focus especially on the role of fathers.”

In its Child Alert launched in May, UNICEF drew attention to the estimated 2.2 million children who are not yet receiving the full benefit of the Government’s recent investments, because they are trapped in conflicts or exposed to tensions. Ways must be found for these children to also benefit from genuine and important advances UNICEF has seen elsewhere in Myanmar.

“Children who have not yet seen their lives and their welfare improve need peace, full access to health services, and protection from violence and abuse” continued Bainvel. “In Myanmar, as elsewhere, conflicts are mostly staged by men, and peace agreements are discussed predominantly between men. These men need to remember they are fathers and uncles and brothers, with real responsibilities towards the children in their lives and their communities” concluded Bertrand Bainvel.

“Only when peace comes and services resume everywhere in Myanmar will all Myanmar’s children benefit from the progress the country is currently making.”