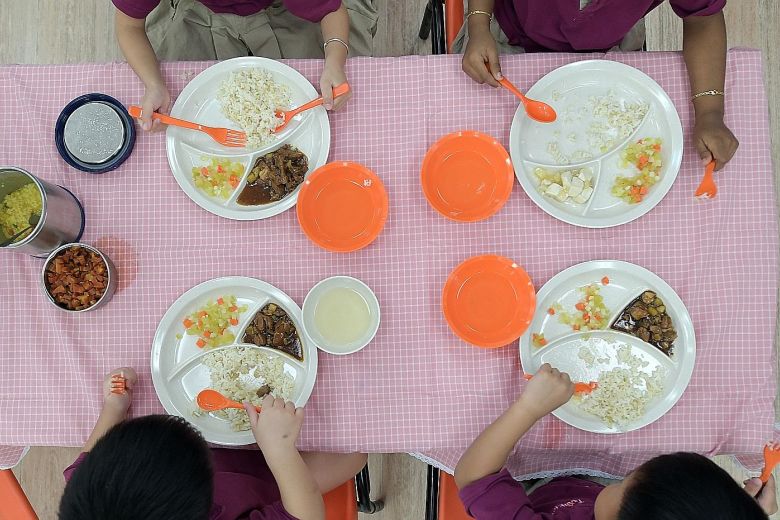 The FoodSteps programme will start initially in 15 schools in the area run by the South West Community Development Council, with volunteers and food enthusiasts dishing up fun and interactive activities to entice 1,500 young palates to go for healthy food choices. ST FILE PHOTO

A move to get primary school pupils to junk potato chips and fried chicken wings and snack instead on healthier alternatives like carrot sticks and cherry tomatoes will be launched next month.

Called FoodSteps, it plans to start initially in 15 schools in the area run by the South West Community Development Council, with volunteers and food enthusiasts dishing up fun and interactive activities to entice 1,500 young palates to go for healthy food choices.

The pilot programme was announced yesterday by Senior Minister of State for Health Amy Khor.

Getting them to switch when young is important as it "can help create lifelong preferences for healthy foods and hence better health", she said, adding that the programme will pay special attention to pupils from "disadvantaged" families because of the greater challenges they may face in leading healthy lifestyles.

Dr Khor, who is also Senior Minister of State for the Environment and Water Resources, was speaking at the inaugural World Food Future for Women Conference, held in conjunction with International Women's Day, which was on March 8.

The conference on food science and nutrition was attended by about 300 people, with six panel discussions featuring speakers who included industry leaders, policymakers and experts.

Preceding the session on Healthy Eating Update 2019, Ms Joanna Chan, group director of the Health Promotion Board, called on Singaporeans to "consume all food in moderation" to combat the growing threat of diabetes.

Singapore reportedly may have one million diabetics by 2050.

Dr Khor, in her speech, also stressed that a change of diet can benefit the environment too.

Eating less red meat, for instance, not only reduces the risk of a heart attack and stroke but also lowers Singapore's carbon footprint, because 1kg of beef creates about 13.3kg of carbon dioxide, while 1kg of poultry or vegetables produces less than one-quarter of it.

Similarly, local produce such as eggs and vegetables help to protect the environment as the short distance they travel significantly cuts Singapore's carbon footprint.

Sustainable eating includes cutting down on food waste too, said Dr Khor. Such waste accounts for about half the daily garbage of a household here, a 2017 survey shows.

By reducing such waste, Singapore lowers its carbon footprint and "we can make positive strides towards protecting both ourselves and the planet's health", she added.

Dr Khor also reiterated the importance of food security, noting the establishment of the Singapore Food Agency on Monday. It will consolidate the regulatory functions of the Agri-Food and Veterinary Authority, National Environment Agency and Health Sciences Authority.

The new agency's goals include meeting 30 percent of Singapore's nutritional needs by 2030 and carrying out research on food safety.